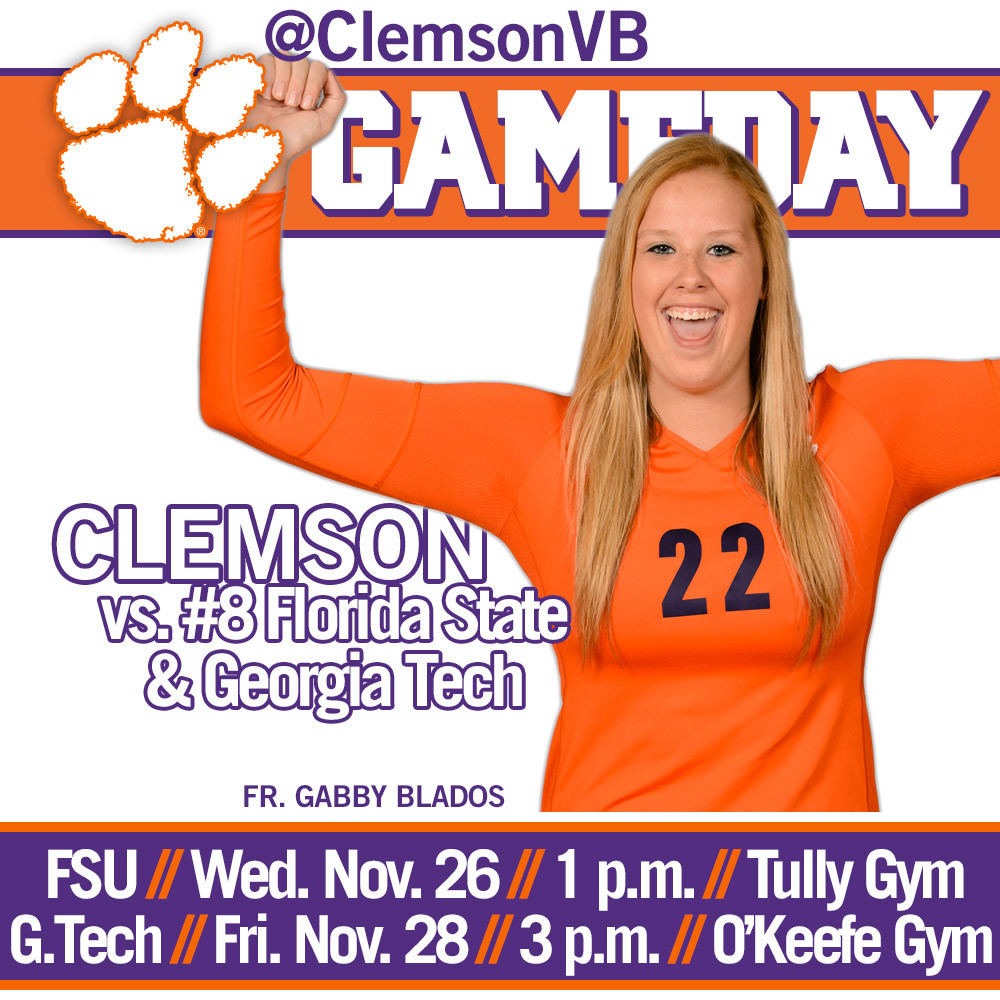 CLEMSON, S.C. – The Clemson volleyball team hits the road this week for its final two matches of the 2014 season. The Tigers face No. 8 Florida State on Wednesday, Nov. 26 before heading to Atlanta on Friday, Nov. 28 to meet Georgia Tech. Wednesday’s match in Tallahassee is set for 1 p.m., while Clemson squares off against the Yellow Jackets at 3 p.m. Friday in a match that will be broadcast on ESPN3.

Karis Watson has 167 total blocks and a 1.48 blocks per set average on the season. The senior middle ranks in a tie for sixth in the nation and is first in the ACC in total blocks, and is ninth nationally and second in the conference in blocks per set average. Her numbers also put her in eighth and sixth in the two categories, respectively, in Clemson record books for blocks in a single season.

Kristin Faust leads the Tigers offensively, with 384 kills and a 3.52 kills per set average, good enough for seventh in the conference statistical rankings. Graduate student Haleigh Hampton has 213 kills for the Tigers in 2014, and, combined with the 773 she recorded in her first three seasons at Long Beach State, is just 14 kills away from reaching 1000 for her career.

Kate Federico has 1,111 assists on the season and is averaging 9.83 per set, which ranks fifth in the ACC. Federico is currently third in program history in terms of single season assists by a freshman, and needs just six more in order to pass current assistant coach Kelsey Murphy Saberhagen and move into second place in the category.

Scouting Florida StateThe Seminoles are 26-2 overall and 14-2 in conference play, and are coming off 3-0 sweeps over Syracuse and Boston College in Tallahassee last weekend. The team, currently ranked eighth nationally, sits in the top five of the ACC statistical rankings in hitting percentage, opponent hitting percentage, assists, kills and blocks. Florida State is led on offense by Nicole Walch (3.86 kills per set), and on defense by Sarah Burrington (1.45 blocks per set) and Katie Mosher (4.20 digs per set).

Scouting Georgia TechThe Yellow Jackets have a 12-17 overall record and a 5-11 mark in the ACC, most recently falling to Virginia (3-1) and Virginia Tech (3-0) on a road trip last weekend. Georgia Tech faces Miami on Wednesday in Atlanta before hosting the Tigers on Friday. Teegan Van Gunst leads the team in kills per set, averaging 3.40, while Rebecca Martin dishes out 9.18 assists per set. Sydney Wilson leads the Jackets in blocking (0.94 per set) and London Ackerman has a team-best 3.68 digs per set average.