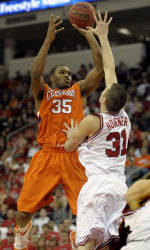 RALEIGH, N.C. (AP) -Clemson again had a letdown late. This time, the Tigers had just enough left to overcome it.

Trevor Booker scored 20 points and No. 24 Clemson held on to beat North Carolina State 73-70 on Saturday.

Tanner Smith added 11 points, including two late free throws, to help the Tigers (15-3, 3-1 Atlantic Coast Conference) claim what center Jerai Grant called “maybe the most important win of the year for us.”

Clemson never trailed but blew nearly all of a 21-point lead before making two defensive stops in the final minute to snap a pesky streak of post-victory letdowns that dated to 1997-98.

“It’s a sign that we’re maturing, but at the same time, we can’t let teams come back like that,” Booker said.

Julius Mays had a season-high 17 points for the Wolfpack (12-6, 1-3), who trailed 71-70 and had the ball when Grant appeared seemingly out of nowhere to block Richard Howell’s open layup with about 35 seconds left.

“It’s just an effort play,” Clemson coach Oliver Purnell said. “You can look at it and wave at it … but he had the courage and the energy, the will, to go get it.”

Clemson milked some clock before Smith hit his free throws with 18.6 seconds left and N.C. State called its final timeout. The Tigers refused to give Wolfpack sharpshooter Scott Wood an open look, and Mays’ 3-pointer with about 5 seconds left went around the rim and out with the rebound going out of bounds under the basket with 2 seconds left.

Mays launched a desperation 30-footer that went off the front of the rim at the buzzer.

“The play kind of broke down. I saw my man help off on Scott, so I took a couple dribbles and got a good look,” Mays said. “It just got the last little bounce on the rim, and it was the wrong bounce. It just came out.”

Grant finished with 11 points for the Tigers, who have been plagued by the letdowns that have followed some significant victories. After beating a ranked team, they had lost the following game 14 consecutive times before this one – which down the stretch bore a strong resemblance to the Tigers’ most recent attempt. After upsetting then-No. 12 Butler in November, they blew a 23-point lead and lost to Illinois.

“We wanted (this game) more. We dug deep,” Grant said. “We couldn’t let that first-half lead go to waste.”

But this time, Clemson, which routed North Carolina by 19 points last time out, made just enough plays to hold off an N.C. State team that was trying to win consecutive games against ranked teams for the first time since 2006-07.

“It’s just a tough thing (when) you have a big emotional win and then you’ve got to go on the road in the ACC, on Tobacco Road, and win,” Purnell said. “It’s a tough thing to do.”

Tracy Smith scored 16 points and Howell finished with 13 points and 12 rebounds. Wood, a freshman who had a season-high 31 last time out, and Farnold Degand added 11 points apiece for N.C. State, which was coming off an upset at No. 25 Florida State.

This one certainly didn’t seem like it would be headed to a tight finish after Clemson took apparent control with an overwhelming first half highlighted by two big runs.

The Tigers opened the game on a 14-5 burst, then used a 16-2 run midway through the half to push the lead into double figures. Demontez Stitt capped the second run by driving the lane for a layup that made it 36-16 with 4:45 left, and Clemson went up 43-22 on Grant’s layup with 2:13 left.

“It could have been ugly,” Tracy Smith said.

Meanwhile, the Wolfpack went without a field goal for 10 minutes – including a 7-minute stretch in which they managed just one field-goal attempt. But that was well before Mays helped tighten this one, hitting a one-hander to cap the half-starting run that made it 54-48 with 12:15 to play.

“We dug ourselves a big hole,” Wolfpack coach Sidney Lowe said. “I’m very proud of the way they continued to fight and try to get back into the ballgame.”