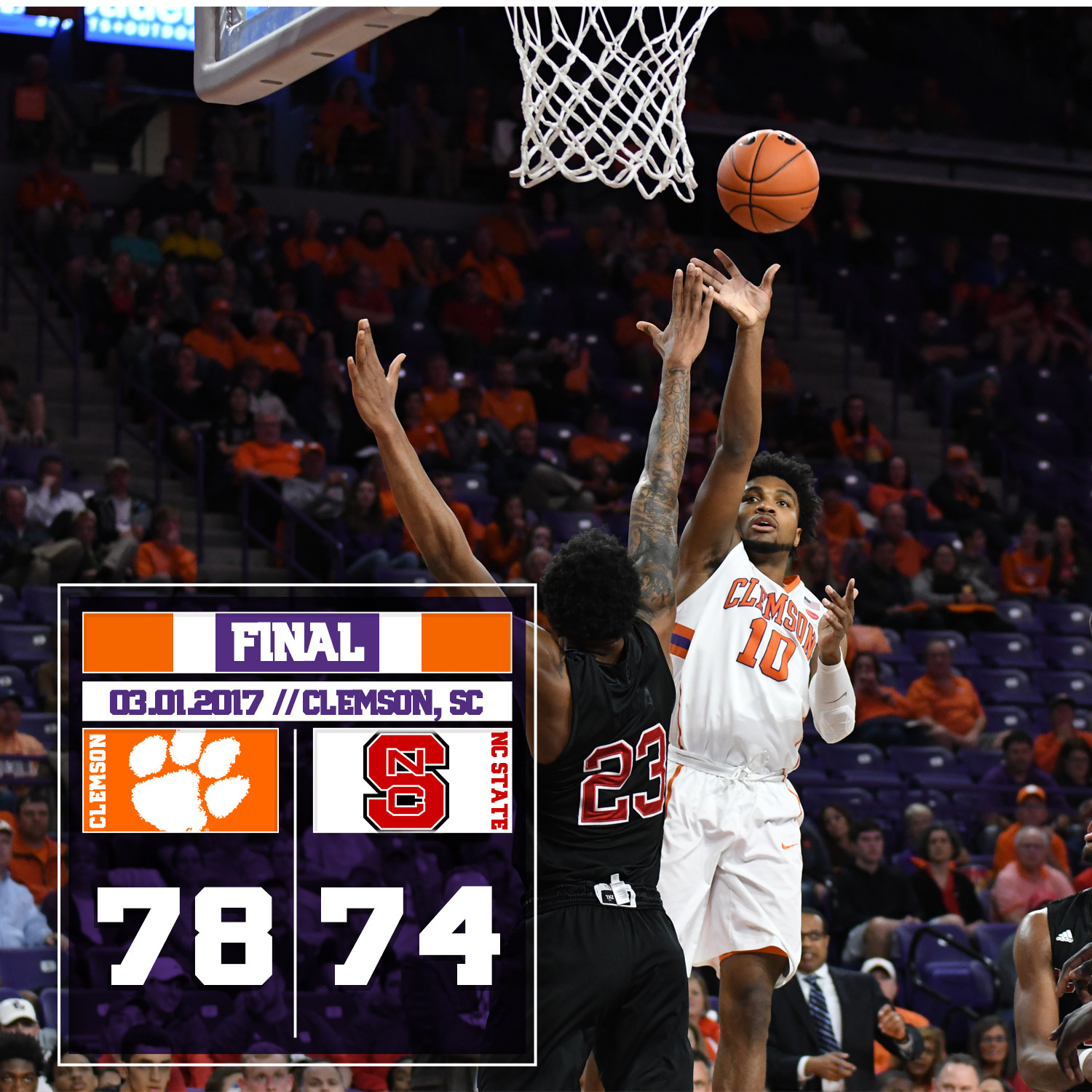 CLEMSON, S.C. — After a season of heartbreaking finishes, Clemson came out on top Wednesday with a thrilling 78-74 win over NC State in Littlejohn Coliseum. The Tigers contested a Dennis Smith three that went wide right and back to the Tigers with three seconds to play. Jaron Blossomgame tacked on two free throws for the final margin, pushing Clemson to 15-14 on the season (5-12 in the ACC). The Wolfpack fell to 15-16 overall (4-14 in league play).

Blossomgame scored all 16 of his points after halftime Wednesday, pushing him over the 500-point mark for a second straight season. He hit a crucial three-pointer that gave the Tigers a 75-72 lead with 1:27 to play, and 3-4 at the charity stripe inside the final minute to preserve the win. Shelton Mitchell also added 16, while Sidy Djitte chipped in 12 points and nine rebounds for a second consecutive game. Abdul-Malik Abu led the Wolfpack with 18.

Mitchell got his team off to a hot start, reaching double figures for the ninth time in the last 10 games by the first media timeout. Included were a couple of three-point makes for the sophomore, one of four in the early going for Clemson. NC State shot efficiently, however, and had control with a 29-26 lead that forced a timeout with nearly five minutes to play. After Clemson answered with a 7-0 run, State ended the half strong and took a 38-37 lead into the locker room behind a baseline jumper by Ted Kapita.

The Tigers took a six-point lead in the final 10 minutes at 63-57. Djitte scored four straight points after grabbing offensive rebounds on back to back possessions. But State chipped away and closed to within one, 65-64. It looked all too similar with just under two minutes left, when Smith drilled a three with 1:54 to play. But Blossomgame would not let the Tigers be denied this time, finishing on the aforementioned high note.

The Tigers finish the regular season at home on Saturday against Boston College. Clemson’s four seniors will be honored before and after the game, which is scheduled for a 4 p.m. tipoff in Littlejohn Coliseum.

“First off, I really want to thank our fans for coming out tonight. I thought we had a terrific crowd in some not-so-great weather conditions. There was an unbelievable student turnout, and a lot of season ticket-holders there supporting this team and appreciating their efforts, so I want to thank them again for coming. I thought it made a difference. I’m proud of and really happy for my guys. We finally gutted one out and made a couple of plays down the stretch. Jaron [Blossomgame] certainly was very good, especially over the last 10 minutes, he had a huge three and some big free throws. We finally got a couple of stops when we really needed them.”

On winning a close game as opposed to a blowout:

“It probably does help a little bit, to be honest with you. Just to have some guys make some plays and to see one of the last shots go out. Our guys did some nice things. I thought we executed well down the stretch. NC State is hard to guard…man, are they hard to guard. Dennis Smith is really talented and can get by you and make shots. [Abdul-Malik] Abu really bothered us early on. I thought they made some guarded shots. I thought their guys made some shots where we contested some things. And we had some lapses. That’s the thing we’ve been fighting all year, and I’m sure we still struggled on 12 to 14 points that we just have to do better on. I did think we tightened some things up in the second half. Our rebounding was good, and that was really important in this game.”

“I could tell that one was off. It was funny. There are some of the other ones that I’ve been on line with and I could tell they were in, the Seth Allen one [at Virginia Tech] for sure. Our guys did a better job. We switched a bunch of things, and guys really reacted. Sidy [Djitte] made a good contest to step out as well. He made a nice read to jump out. Jaron [Blossomgame] did a nice job of zoning up some things behind it. It was just good all the way around. We had to make some offensive plays and defensive plays, and get the ball in bounds at the end. Jaron [Blossomgame] had to make some free throws. It was just nice to execute a bunch of good things in the last minute of the game.”

“Certain games, it’s easier to get him the ball than others. We had some opportunities. They did a really good job on him. The size bothered him for a long while. He didn’t have a good first half, when he missed some that he can make. We’re certainly going to try to get him the ball in most instances. Some games, again, it’s easier than others, just because of size, personnel and length, as well as the way certain teams are guarding you. But he was really good. You don’t expect him to not play well. When he’s 0-for-5, you feel like he’s got five coming. He knows we believe in him. He’s our guy, and we’re going to get him the ball.”

“Well, I thought that was a well played game by both teams. I was proud of my team. I thought they hung in there and fought really hard. I thought the critical play was the late foul on Jaron [Blossomgame] with three on the shot clock. We were down one and just gave them two points. I felt like if we got a stop there, we would have a chance to take the lead. Dennis [Smith] came down and made a big three the possession before, but we didn’t get as good of a look as we wanted to there when we were down two. I want the ball in Dennis’ hands. I thought the foul with three or four seconds left on the shot clock was a drastic error on our part. They played good. Jaron [Blossomgame] played great in the second half after being scoreless in the first half. He came out the second half and played great. I thought we did a good job making it hard on him too. We didn’t really let him get in a good rhythm. We did a lot of things well. We just came up a little short.”

On his team’s play:

“I’ve been really proud of them. I think sometimes people forget how hard it is for them. We recruited every single guy on this team. We have great relationships with every guy. It’s tough for them sometimes too but they battle. We went to Georgia Tech and won over there and then came here and played basically down to the last possession and had a chance to win. Now we’ve got to go to New York and see if we can get on a roll, one way or another.”

“We’re going to evaluate him tomorrow. It’s just some sort of knee injury. I don’t know if our people are ready to determine what it is yet until they look at him tomorrow.”