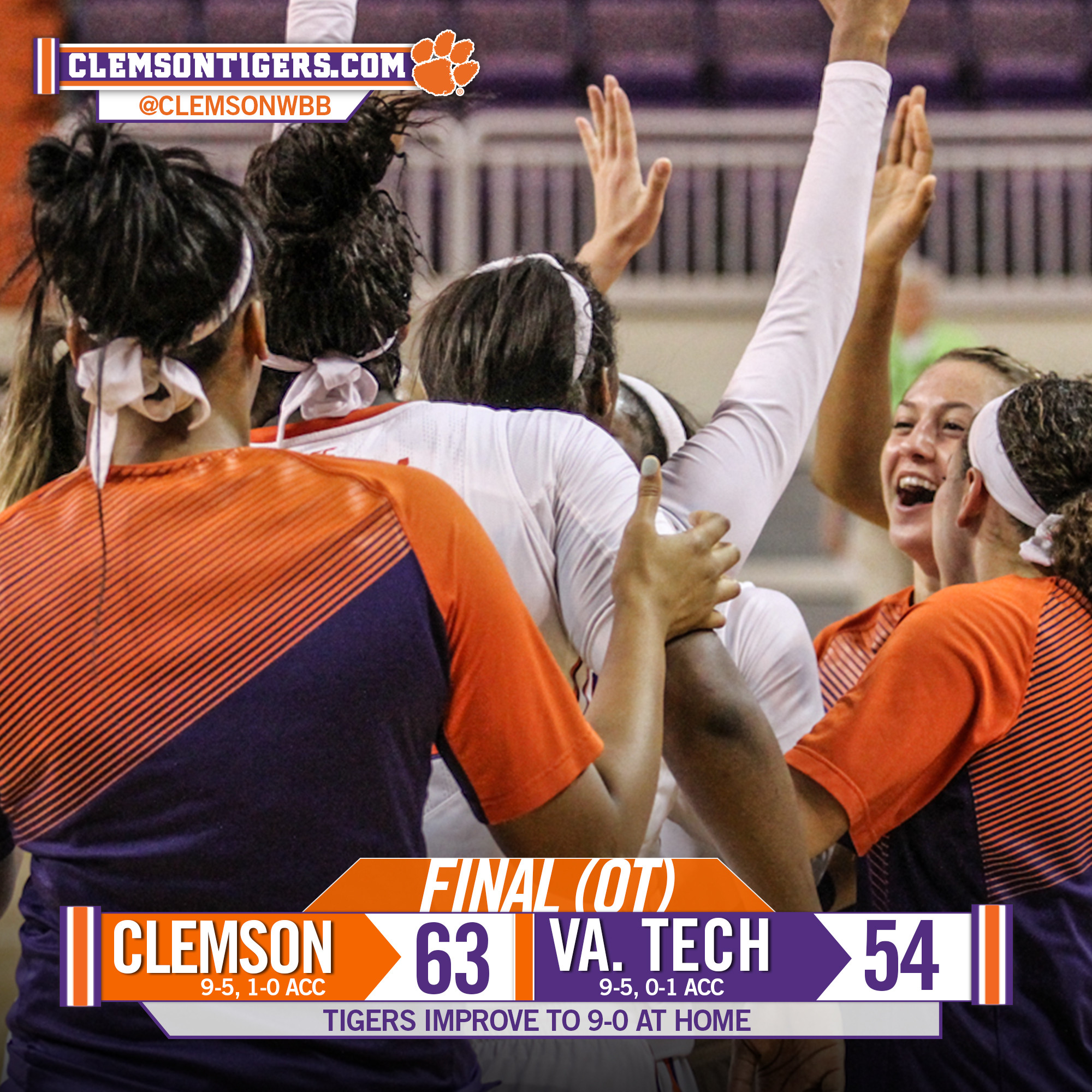 Clemson’s seniors were the key cogs, as Nikki Dixon had team-highs of 21 points and 10 rebounds, her second double-double in the last three games, and Chelsea Lindsay added 15 points and seven rebounds. The senior duo also combined to go 11-12 from the free throw line in the game.

Clemson went into halftime trailing by two, 31-29, as Francesca Tagliapietra swished a 25-footer at the buzzer. Virginia Tech came out in the second half with the first nine points to take an 11-point edge. and held the Tigers to a 2-16 mark in the first 12 minutes of the half.

The Tigers began to chip away at the lead from the line, and Dixon’s hoop-and-harm with 1:50 to play brought the Tigers to within a pair, 52-50. After a defensive stop, Dixon was fouled and hit both of her free throws with 50.5 seconds to send the game to overtime.

Virginia Tech struck first in overtime, but that would be all they’d muster, as a pair of Dixon layups gave Clemson the lead for food. Tiffany Lewis scored five straight, including a huge left-wing three, to help put it out of reach.

Clemson will play at Georgia Tech on Sunday Jan. 4, at 2:00 p.m. in McCamish Pavilion.

“We were sluggish in Tiger, which is our motion offense – they weren’t cutting hard and as you see once they started cutting hard to the basket, peeling off and curling off those screens we caught the ball and laid it up, we got some pull up shots and got a chance to get to the basket.

“When you cut down the turnovers and make free throws, you can win the game. I thought Nikki played a great game. I had to tell her to settle down and her shots would start falling. This was a great win for us and we are glad to get the ACC win.”

Kelly Gramlich, At the Buzzer

Seniors Nikki Dixon and Chelsea Lindsay combined for over half of Clemson’s 63 points and willed this game into overtime after an inspired final ten minutes of play in the second half. Lindsay had arguably the best game of her ACC career and Dixon overcame a tough shooting night from the floor, somehow finding a way to score key points for the Lady Tigers in the second half and the overtime period. Freshman wings Shelbie Davenport, Tiffany Lewis and Francesca Tagliapietra all knocked down key three pointers throughout the game to help seal the victory.

In all my years playing and watching basketball I do not think I have ever seen a team overcome such a rebounding deficit to win a game. Virginia Tech outrebounded Clemson 59-31, but the Lady Tigers overcame this deficiency on the defensive side of the ball, forcing Virginia Tech into 25 turnovers and scoring 24 points off of those turnovers. The Clemson Lady Tigers never gave up, even when Virginia Tech led by 11 points with 8:31 to go in the second half. With this gutsy and inspired performance, Clemson improves to 1-0 in the Atlantic Coast Conference and 9-0 at home.