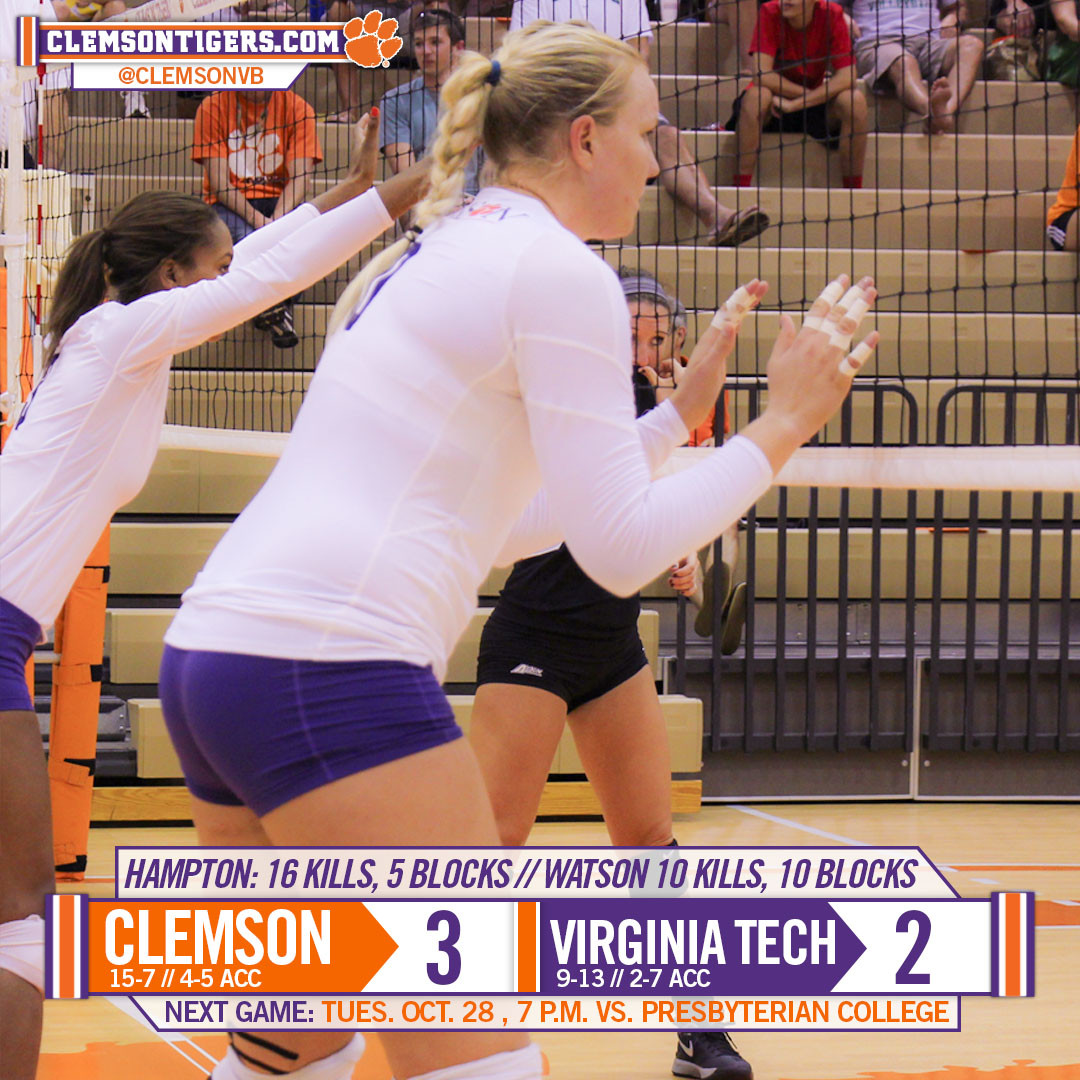 Haleigh Hampton led the Tigers with 16 kills, hitting .364 on the match. Karis Watson put down 10 kills and added 10 blocks to give the middle hitter the first double-double of her career. The Tigers had 16 total blocks as a team. The backcourt defense was led by Niki Collier, who bested all players on the court with 28 digs. Kate Federico led all players on the court with 43 assists.

The play was fairly even throughout the match. In the first set, scrappy play by the Tigers allowed Virginia Tech errors to make the difference in the set, and after taking a 5-4 lead, Clemson controlled the rest of the set. Clemson hit just .152 in the set, led by Hampton who had three kills and no errors on five attempts, however Tech committed 14 unforced errors to Clemson’s eight and the Tigers took the first set 25-23.

Sets two and three were close as well. The Tigers came out strong in the second set, but the Hokies were able to erase a 7-4 Tiger lead and tie it up at 7-7. The teams saw seven more ties before the Hokies broke away after a 22-22 tie to take the second set 22-25.

After being tied at nine in set three, the Hokies went on an 8-2 run to make it 10-17. The Tigers answered back, tying it up again at 22’s and forcing the set into extra points before the Hokies took it 27-25.

Clemson struggled at the start of set four and found themselves down 15-8. However, a combination of 10 Tiger kills and seven Hokie errors gave Clemson a 25-23 set four victory and forced a fifth set.

In the short fifth set, the teams saw 11 tie scores. Once again, Clemson was able to allow Virginia Tech to commit unforced errors; the Hokies had seven to Clemson’s three. The Tiger defense kept the Hokies at a .094 hitting percentage, the lowest all match, and Hampton led the way on offense with five kills on seven attempts. Hampton’s 16th kill of the match gave the Tigers the fifth set and sealed the match 3-2.

Clemson will be back in Tigertown on Tuesday, Oct. 28 to take on Presbyterian College at 7 p.m. in Jervey Gym.