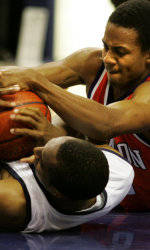 The Tigers (4-0) led for nearly the entire game. The Buccaneers only lead came at 7-6.

Shawan Robinson’s lay-up and free throw with just under six minutes to go gave Clemson its biggest lead at 67-46.

Robinson added 11 points for the Tigers, while James Mays scored 10 points and pulled down 13 rebounds, eight of them off the offensive glass.

Charleston Southern (2-1) got a career-high 13 points and 10 rebounds from Vernon Huger. The Buccaneers leading scorer, Trent Drafts, was limited to eight points and six rebounds.

Both teams shot 39 percent from the field, but Clemson shot 30 free throws, making 13, while the Buccaneers were 7-of-9 from the foul line.