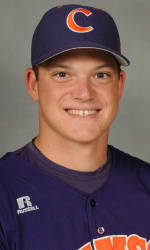 Clemson scored two runs in the sixth inning to tie the score and broke the 3-3 tie with four runs in the seventh inning in its 7-5 win over Boston College in the first game of a doubleheader at Commander Shea Field on Saturday afternoon. The Tigers, who took a 2-0 lead in the series, improved to 21-13 overall and 8-9 in the ACC. The Eagles dropped to 13-19 overall and 6-10 in ACC play.

Alex Frederick retired all three batters he faced in the ninth inning to record his third save of the season.

The Eagles grabbed the game’s first lead in the first inning. Brad Zapenas led off with a walk. Two batters later, Garret Smith doubled down the left-field line to score Zapenas.

In the top of the third inning, John Hinson lined a one-out single to right-center and moved to third on Jeff Schaus followed with a sacrifice fly to left to score Hinson.

Tom Bourdon led off the bottom of the third inning with a double over the third-base bag on a 1-2 pitch, then Zapenas lined a single to center to move Bourdon to third. Two batters later, Smith laced a one-out double to left-center to plate Bourdon. Anthony Melchionda hit a grounder to Hinson at third as Zapenas broke for home. Hinson’s throw home was in the dirt, allowing Zapenas to score on the throwing error.

In the eighth inning, Matt McGovern led off with a single to right field and scored on Smith’s double to left-center. Melchionda blooped a single to center to move Smith to third, then Andrew Lawrence grounded a single through the right side to plate Smith. But Haselden retired the next three Eagles and the Tigers maintained a 7-5 lead.

Smith went 4-for-4 with three doubles and three RBIs to pace Boston College, who had 10 hits in the contest.

Clemson and Boston College will play the second game of the doubleheader and series-finale at approximately 3:35 PM.