Tigers To Tangle With Cavs This Weekend

Clemson vs. Virginia Clemson (21-6, 1-2 ACC), ranked as high as #15, will play host to Virginia (19-8, 5-3 ACC) in the Tigers’ first ACC home action of the season. Virginia has won 10 games in a row after being swept at Florida State in its only ACC road series in 2003. Game one Friday will start at 7:15 PM, game two Saturday will start at 4:00 PM, and game three Sunday will start at 1:00 PM. All three games will be broadcast live on the radio by Clemson Tiger Sports Properties and can be heard live via the internet at www.clemsontigers.com. Live stats will also be available for all three games on Clemson’s website. Saturday’s game will follow the football Spring Game, which will start at 1:30 PM at Riggs Field. Saturday’s game will also be broadcast by WSBF (88.1 FM), Clemson’s university station.

The Series Clemson holds a 96-26 advantage in the series dating back to 1955. Last season, the Tigers took all three games at Virginia by a combined score of 35-9. Two seasons ago at Clemson, the Tigers won all three games by a combined score of 30-6. Virginia’s last win at Clemson came in 1999, a 9-3 win in the series opener. Clemson is also 38-4 against the Cavaliers at Doug Kingsmore Stadium. Tiger Head Coach Jack Leggett is 25-6 against Virginia as Clemson’s skipper, including an 11-1 mark at home. Leggett was also 2-0 against Virginia as the Vermont coach. Zane Green is a career 5-for-10 against Virginia. Michael Johnson is hitting .393 with two homers and in seven career games, while David Slevin is 5-for-13 (.385) with five RBIs in three career games against Virginia. Tyler Lumsden threw 6.0 shutout innings while striking out six against no walks last year in earning the win at Virginia. Patrick Hogan has also not allowed a run in 5.1 innings pitched in three career appearances against Virginia.

The Starting Pitchers Junior righthander Chris Gale (2-1, 2.73 ERA) will take to the mound in game one Friday for the Cavaliers. The 6-5 hurler has allowed just seven walks in 29.2 innings pitched this year and has a complete game to his credit. Freshman lefty Mike Ballard (1-2, 2.23 ERA) will start game two Saturday. In six starts, he has allowed just 26 hits in 32.1 innings pitched. Junior Jeff Kamrath (3-1, 2.72 ERA), Virginia’s ace righthander, or sophomore lefty Andrew Dobies (6-0, 3.35 ERA) will get the call in game three Sunday. The Cavaliers have a 2.63 ERA and are holding opponents to a .236 batting average.

Virginia Overview Virginia, who has won 17 of its last 20 games after a 2-5 start, defeated Liberty (3-0) Wednesday and #15 Richmond (11-4) Tuesday. Virginia opened its season, like Clemson, at Auburn, and was swept in three games (Clemson lost two of three games at Auburn). The Cavaliers have a 16-0 home record, but are just 3-8 on the road. Virginia has committed just five errors and allowed 16 runs during its 10-game win streak. Chris Sweet leads the team in batting average (.376), as Virginia is hitting .319. Mark Reynolds has four UVa’s 12 homers and has driven in 24. The Dennis Womack-led team is only one game out of first place in the ACC standings.

Clemson Overview Clemson is coming off a 4-2 win at #20 South Carolina Wednesday and 5-3 victory over Western Carolina Tuesday. Russell Triplett leads the team in batting average with a .381 clip, as the Tigers are hitting .313 as a team. Brad McCann has a team-high 32 RBIs, while Michael Johnson’s five homers (all on the road) lead the team in that category. Clemson has a 15-0 home record and a .971 fielding percentage. The Tigers have also won 104 consecutive games when leading after eight innings dating back to the beginning of 2001.

Furman Game Tickets at Greenville Available Tickets for the Clemson-Furman game at Furman Baseball Stadium on Tuesday, April 8 are available in advance. Fans can purchase tickets by phone through Ticketmaster at (864) 233-2525, on the internet at www.furmanpaladins.com, or in person at the Timmons Arena Box Office Monday-Friday, 10:00 AM to 5:00 PM. Tickets are $5 and first pitch is scheduled for 7:00 PM.

South Carolina Game Tickets Reserved tickets are still available for the Clemson-South Carolina game Wednesday at 7:15 PM. They can be purchased at the ticket office at the northwest corner of Memorial Stadium, via phone toll-free at 1-800-CLEMSON, or online at www.clemsontigers.com. That day has also been designated Doug Kingsmore Day, as the newly renovated stadium will be dedicated to the former Tiger. Hilderbrand also announced that season ticket sales surpassed the 1,800 mark, a school record, and are no longer available. General admission tickets for all other home games can be purchased for $5 the day of the game at the stadium.

Hogan Leads Tigers Over USC 4-2 Wednesday Junior Patrick Hogan pitched a career-high 7.2 innings in earning the win in a 4-2 win at #20 South Carolina April 2. Hogan allowed just one run on four hits and Paul Harrelson induced a game-ending double play to seal Clemson’s second win in three games this season over its rival. Brad McCann hit back-to-back homers in the seventh inning, as it was Johnson’s ninth career homer against South Carolina. Clemson outhit the Gamecocks 13-6 and left 13 runners on base.

Pitchers Dominating at Home In 15 home games this season, the Tiger hurlers have combined for a 2.35 team ERA to lead Clemson to a perfect 15-0 record. In 134.0 innings pitched, Clemson has allowed just 35 earned runs, 39 walks, and 106 hits while striking out 116. The pitchers have combined to hold opponents to a .215 batting average as well.

Tigers Sport Home Perfection Clemson has a perfect 15-0 record at Doug Kingsmore Stadium this season, which has helped Clemson climb in the polls. The 1.000 winning percentage is the best mark by a Clemson team in Doug Kingsmore Stadium’s existence. The Tigers first played their home games there in 1970, therefore it is in its 34th season as the home of Tiger baseball.

Shutting the Door After Eight In the last three seasons, Tiger pitchers have been perfect in shutting the door when Clemson has had the lead after eight innings. In fact, since the beginning of the 2001 season, Clemson is 104-0 when leading after eight innings, including a 35-0 record in 2001, 51-0 record in 2002, and 18-0 record in 2003. The last team who rallied in the ninth inning to down the Tigers was the last game of the 2000 season, when Louisiana-Lafayette scored two runs in the bottom of the ninth to win 5-4. The game was on June 14 at the College World Series.

Hogan a Hero of Late Junior righthander Patrick Hogan has made eight relief appearances and one startfor a total of 18.1 innings pitched. He has had a hand in three of Clemson’s five team shutouts and has allowed just four runs. In fact, he has allowed hitters to hit just 10-for-63 (.159) and has struck out 17. The Columbia, SC native has brought a competitive spirit and “quiet” fierceness to the mound in 2003, as he has become a “go-to” pitcher out of the bullpen. Hogan also has two saves. His brother, Doug, is a senior catcher at Irmo High School and has already signed a letter of intent to join the Tiger program for the 2004 season. In his first start of 2003 and just his third career start, he shut down #20 South Carolina to lead Clemson to a 4-2 win. The Columbia, SC native allowed just one run on four hits in a career-high 7.2 innings pitched.

McCann & Johnson Opposites Brad McCann and Michael Johnson have both put a positive stamp on the Tiger lineup this season, but they have done so in differing ways. Despite batting #3 and #4 in the batting order and both of their fathers being baseball coaches, here is a list of their differences: 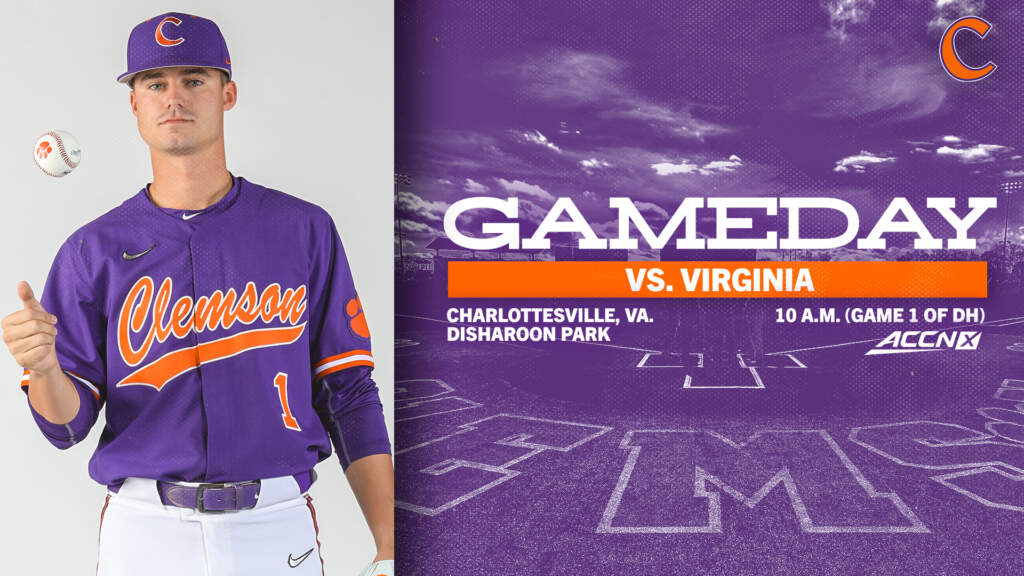