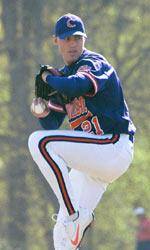 Tigers to Take on Blue Devils This Weekend in Durham

Clemson, SC – Top-ranked Clemson (31-5, 7-2 ACC) will travel to Durham, NC this weekend to face Duke (19-19, 1-8 ACC) in a three-game series beginning Friday at 7:00 PM. Game two Saturday, which was previously scheduled for 5:00 PM, will start at 2:00 PM, while the series finale Sunday will start at 1:30 PM. All three games will be broadcast on Clemson Tiger Sports Properties and can be heard live via the internet at www.clemsontigers.com. Live stats will also be available on Clemson’s website.

Clemson has a 98-57-1 lead in the series dating back to 1904. Head Coach Jack Leggett is 18-7 against the Blue Devils, including a 7-5 record at Jack Coombs Field. Clemson swept Duke in three games last season at Doug Kingsmore Stadium by a combined score of 26-7. The Tigers also swept Duke two years ago at Jack Coombs Field and have won seven in a row overall against the Blue Devils.

Duke, led by third-year Head Coach Bill Hillier, is coming off a 12-2 win over Davidson Wednesday. This weekend’s series will be the first at home for the Blue Devils since March 22-24 when they hosted Virginia. Duke is hitting .293 as a team with 27 homers and a .952 fielding percentage. Senior shortstopKevin Kelly leads the team with a .364 batting average along with six homers and 33 RBIs. Larry Broadway is hitting .312 with six homers and 39 RBIs as well. Duke sports a 5.10 team ERA and a .300 opponents’ batting average.

Clemson is hitting .336 as a team, led by Khalil Greene at .442. Greene needs just three total bases and four hits to break the Tiger career records in the respective categories. Jeff Baker have combined for 42 homers in 36 games this season. The Tiger single-season record for homers by a trio is 57, set last year by Baker (23), Johnson (18), and Jarrod Schmidt (16). Clemson’s ERA stands at 3.85.

The Blue Devils will start sophomore righthander Greg Burke on Friday. Burke, who is 1-3 with a 5.11 ERA in 10 starts and one relief appearance, has walked just nine batters while striking out 54 in 61.2 innings pitched. Junior righty Jeff Alleva (5-4, 4.80 ERA) will start Saturday’s game. Alleva was named ACC Player-of-the-Week last week for his outstanding pitching performance in leading Duke to a 4-2 win over N.C. State Sunday. Freshman lefty Tim Layden (4-5, 5.30 ERA) will start game three for the Blue Devils.

Junior righty Matt Henrie (7-1, 2.09 ERA) will take the mound in game one Friday, while junior righty B.J. LaMura (3-1, 2.76 ERA) will start Saturday’s game. Senior righthander Steve Reba (8-1, 3.47 ERA) will start game three for the Tigers. Reba suffered his first loss in nearly a year in a relief role Wednesday against #7 South Carolina, despite not allowing an earned run. Reba is still 12-0 in his last 14 starts dating back to last year.