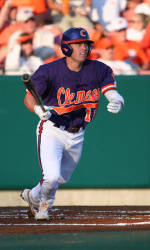 Tigers to Play Host to N.C. State in Three-Game Series This Weekend

The Series Clemson and N.C. State have met 166 times on the diamond, with the Tigers holding a 99-66-1 lead in the series dating back to the 1921 season. Last year at N.C. State, the Wolfpack won two of three games, including wins by scores of 11-4 and 6-5 before the Tigers won game-three 6-3. The Tigers also swept N.C. State in a three-game series at Doug Kingsmore Stadium in 2006.

The Tigers hold a 50-21-1 lead over the Wolfpack in games played at Clemson and 37-13 lead at Doug Kingsmore Stadium. The Tigers also hold a 77-53 advantage in ACC regular-season games.

Doug Kingsmore Stadium. Leggett was 7-18 against N.C. State as Western Carolina’s head coach, meaning he has a 40-34 all-time record against the Wolfpack.

The Starting Pitchers In game-one, N.C. State will start junior lefty Eric Surkamp (1-2, 4.00 ERA) on the mound. The Cincinnati, OH native has made four starts for a total of 18.0 innings pitched. He has allowed 19 hits (.284 opponents’ batting average) and 11 walks with 21 strikeouts.

The Tigers will counter with junior lefthander Ryan Hinson (1-3, 5.40 ERA) on Friday. The Rock Hill, SC native has made four starts for a total of 21.2 innings pitched. He has allowed 27 hits (.307 opponents’ batting average) and seven walks with 20 strikeouts.

In game-two, the Wolfpack will send out junior righthander Clayton Shunick (2-1, 0.78 ERA) on the mound. The Alpharetta, GA native has made two starts and two relief appearances for a total of 23.0 innings pitched. He has yielded 15 hits (.179 opponents’ batting average) and three walks with 23 strikeouts. He has also not allowed a home run this season.

Clemson will counter with junior righthander D.J. Mitchell (1-2, 4.10 ERA) on Saturday. The Rural Hall, NC native has made four starts and two relief appearances for a total of 26.1 innings pitched. He has yielded 25 hits (.250 opponents’ batting average) and 14 walks with 26 strikeouts.

In game-three, N.C. State will start senior righty Eryk McConnell (2-0, 5.40 ERA) on the mound. The Waynesville, NC native has made four starts for a total of 18.1 innings pitched. He has allowed 21 hits (.288 opponents’ batting average) and nine walks with nine strikeouts. He has also not allowed a home run this season.

The Tigers will counter with freshman righthander Graham Stoneburner (3-0, 3.86 ERA) on Sunday. The Richmond, VA native has made four starts and one relief appearance for a total of 21.0 innings pitched. He has allowed 19 hits (.247 opponents’ batting average) and four walks with 17 strikeouts.

The Wolfpack N.C. State, led by 12th-year Head Coach Elliott Avent, enters the series at Clemson with a 12-5 overall record and 3-3 ACC mark after winning two games over Towson by scores of 4-3 and 9-5 on Tuesday and Wednesday, respectively. The Wolfpack also fell twice in three games at home against #5 Miami (FL) last weekend. Like the Tigers, N.C. State has played many close games. Ten of its 17 games have been decided by three runs or less.

Matt Payne is hitting a team-best .382 with a homer and 12 RBIs, while Marcus Jones is batting .364 with two homers, 14 RBIs, and five steals. Ryan Pond has a team-high three home runs as well.

The pitching staff has a 2.98 ERA and .244 opponents’ batting average along with 144 strikeouts and 59 walks in 154.0 innings pitched. Lefthander Jimmy Gillheeney has an 0.82 ERA and team-high three saves along with 15 strikeouts in 11.0 innings pitched over six relief appearances. N.C. State is fielding at a .962 clip as well.

The Tigers Clemson enters the series against N.C. State with a 12-6 overall record and 2-4 ACC mark after defeating #21 Coastal Carolina 9-6 on Tuesday and topping Furman 14-2 on Wednesday. The Tigers also fell twice in three games against Boston College at home last weekend. Clemson, who is 10-3 at home, has had 11 of its 18 games decided by three runs or less.

The pitching staff has a 4.75 ERA and .281 opponents’ batting average. Righthander Matt Vaughn has struck out 17 against just four walks in 10.1 innings pitched and has five saves in nine relief appearances. The Tigers are fielding at a .962 clip as well.

Schaus Patiently Finding Way on Base Freshman outfielder Jeff Schaus (Naples, FL) is hitting .283 in 18 games (17 starts) this season. But he is finding his way on base at an outstanding rate, as he has a .419 on-base percentage thanks to a team-high 14 walks. He has also struck out just five times.

Hogan Leads Tigers Over Chanticleers 9-6 Doug Kingsmore Stadium. The Tigers built a 8-0 lead after two innings, as Hogan hit a two-run homer in the first inning and three-run long ball in the second inning. Wilson Boyd 14-game hitting streak came to an end, as he was 0-for-2 with two runs scored and three walks. Justin Sarratt picked up his first career win in relief as well.

Tigers Top Furman 14-2 Doug Kingsmore Stadium. Hogan went deep twice for the second straight game, as he hit a grand slam in the fourth inning and two-run homer in the fifth inning. Alex Lee added three hits for the Tigers, who totaled 15 hits in the game. Starter Craig Gullickson pitched 6.0 innings, allowing four hits, no runs, and two walks with eight strikeouts to pick up the win. Four Tiger pitchers held the Paladins to nine hits, including just one hit in 12 at-bats with runners in scoring position.