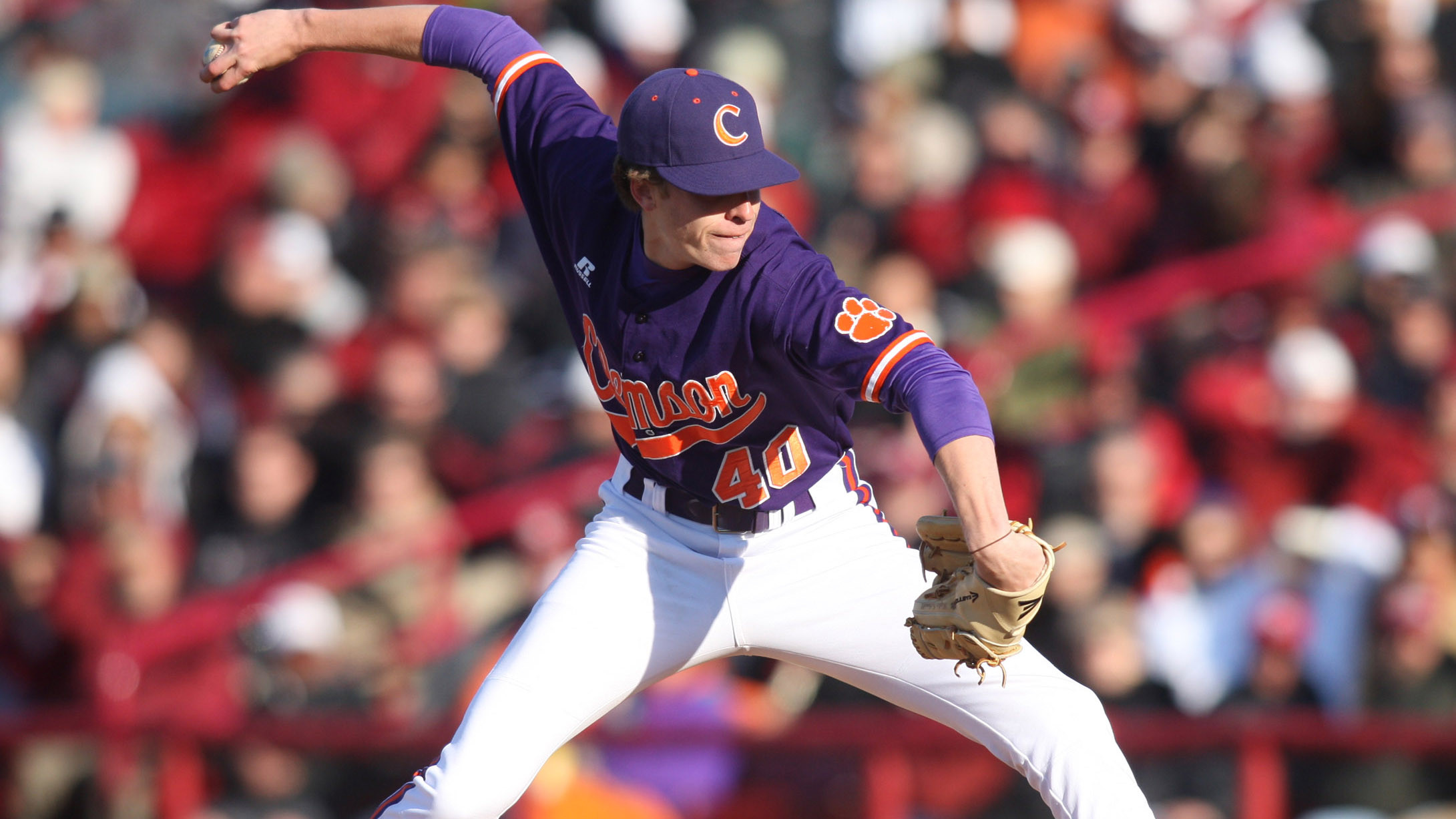 Tigers to Play Host to Morehead State Tuesday and Wednesday

Clemson vs. Morehead StateClemson (11-7) will host Morehead State (7-12) in a two-game, midweek series on Tuesday and Wednesday at Doug Kingsmore Stadium. Game times are 6:30 PM (Tuesday) and 4:00 PM (Wednesday). Both games will be available live via webcast on TigerCast at ClemsonTigers.com. Both games will also be broadcast live on the radio by WCCP (104.9 FM) out of Clemson. Live stats for both games will be available at ClemsonTigers.com as well.

The SeriesClemson and Morehead State have met three times on the diamond, with all three matchups coming in a series at Doug Kingsmore Stadium on February 15,16, 1997. The Tigers won all three games (6-2, 9-1, 1-0) by a combined score of 16-3. Current Clemson Assistant Head Coach Bradley LeCroy played against the Eagles as a freshman in game-two of that series. It was his first action as a Tiger.

The Starting PitchersMorehead State’s starting pitchers for both games of the series have yet to be determined.

The Tigers will start freshman lefthander Matthew Crownover (2-0, 2.45 ERA) on Tuesday. The Ringgold, GA native has made three starts and one relief appearance for a total of 14.2 innings pitched. He has surrendered nine hits (.180 opponents’ batting average) and two walks with nine strikeouts.

Clemson’s starter for Wednesday’s game has yet to be determined.

The EaglesMorehead State, led by first-year Head Coach Mike McGuire, enters the series at Clemson with a 7-12 overall record and 2-4 Ohio Valley Conference mark after being swept at Tennessee Tech last weekend. The Eagles, who have yet to play a home game this season, are 2-7 on opponents’ home fields.

Morehead State is averaging 4.5 runs per game and hitting .261 with a .338 slugging percentage and .337 on-base percentage thanks to 61 walks and 19 hit-by-pitches against 166 strikeouts. The team has also totaled 25 doubles, five triples, five homers, and 16 stolen bases in 32 attempts.

Kane Sweeney is hitting a team-best .365, while Chase Greenwell is batting .338 with 15 RBIs. Alan Mocahbee is hitting .297 with a team-high three home runs and 15 RBIs. Chris Robinson has a team-high six stolen bases as well.

The pitching staff has a 5.29 ERA and .270 opponents’ batting average along with 113 strikeouts against 100 walks in 166.2 innings pitched. Senior righty Austin Haney has two of the team’s three saves. Morehead State, who has allowed 42 steals in 50 attempts, is fielding at a .958 clip as well.

The TigersClemson enters the series against Morehead State with an 11-7 overall record and a 3-3 ACC mark after falling twice in three home games against #12 Virginia last weekend. The Tigers are 8-5 at home in 2013.

The Tigers are averaging 4.9 runs per game and hitting .260 with a .352 slugging percentage and .328 on-base percentage thanks to 53 walks and 11 hit-by-pitches against 128 strikeouts. Clemson has also totaled 29 doubles, three triples, seven homers, and 24 stolen bases in 35 attempts.

Garrett Boulware is hitting a team-best .333 with four doubles, one triple, three homers, and 15 RBIs, while Steve Wilkerson is batting .329 with five doubles, one homer, 13 RBIs, and a team-tying-high six steals. Shane Kennedy has two homers, two triples, and a team-high 16 RBIs as well.

The pitching staff has a 2.91 ERA and .251 opponents’ batting average in 164.0 innings pitched. The staff has allowed 53 walks against 127 strikeouts, good for a 2.40 strikeout-to-walk ratio. Junior righty Matt Campbell has four of Clemson’s five saves, while sophomore righthander Kyle Schnell has a 1.29 ERA and 10 strikeouts against only one walk in 14.0 innings pitched over nine relief appearances. The Tigers are fielding at a .968 clip as well.

Clemson has also fared well in other clutch situations in 2013. The Tigers are hitting .326 with runners on base and .342 with runners in scoring position.

Schnell Stellar From the SideSophomore righthander Kyle Schnell (Alpharetta, GA) is in his first season at Clemson after transferring from Lake Sumter (FL) Community College. He has already become one of the team’s best relievers thanks in large part to his sidearm delivery. In 14.0 innings pitched over a team-high nine appearances, all in relief, he is 1-0 with one save, a 1.29 ERA, and a .208 opponents’ batting average. He also has allowed just 11 hits (nine singles, two doubles), two runs, and one walk with 10 strikeouts.

Schnell played a big part in both of Clemson’s wins at #8 N.C. State on March 8,9. He gave up just one hit with three strikeouts in 2.1 innings pitched in Clemson’s 10-5 win on March 8. The following day, he earned his first career win by tossing 2.2 scoreless innings with one strikeout in the Tigers’ 7-4 victory.