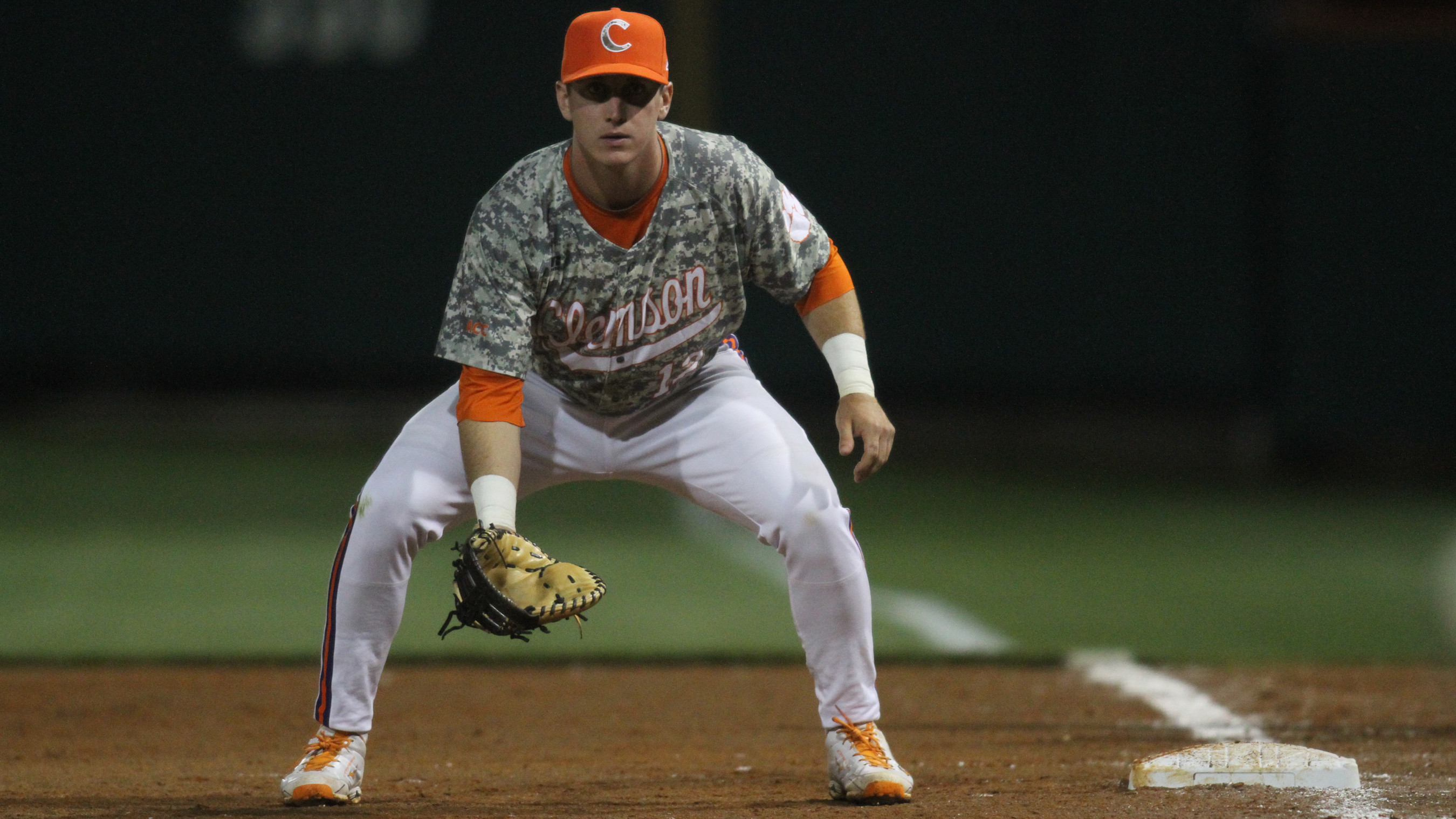 Saturday’s game will be televised by RSN and will be available via webcast on ESPN3 (subject to blackout), while Monday’s game will be televised by ESPNU. All three games will also be broadcast live on the radio by Clemson Tiger Sports Network. Live stats will be available online at ClemsonTigers.com for all three games as well.

Ticket PromotionsMembers of the Tigers Letterwinners Association and all youth baseball players who wear their team jersey or cap will receive free admission to all games of the Maryland series from May 4-6.

In addition, any Clemson Baseball camper from the past year who wears their camp t-shirt will also receive free admission to the games. The deals are only valid at the Doug Kingsmore Stadium ticket booths.

The SeriesClemson and Maryland have met 159 times, with the Tigers holding a 119-40 lead in the series dating to the 1923 season. The two teams have faced each other at least one time every year since 1954.

The Tigers hold a 65-8 lead over the Terrapins in games played at Clemson and a 55-3 advantage at Doug Kingsmore Stadium, but Maryland has won the series-finale in each of its last two trips to Tigertown (2009,11). Clemson also holds a 106-36 advantage over Maryland in ACC regular-season games.

Jack Leggett has a 50-9 record against Maryland as Clemson’s head coach, including a 25-2 mark at Doug Kingsmore Stadium.

The Starting PitchersIn game-one, Maryland will start senior lefthander Jimmy Reed (5-3, 2.36 ERA) on the mound. The Gaithersburg, MD native has made 11 starts for a total of 72.1 innings pitched. He has allowed 70 hits (.253 opponents’ batting average) and 25 walks with 52 strikeouts.

The Tigers will counter with sophomore righty Daniel Gossett (7-2, 2.43 ERA) on Saturday. The Lyman, SC native has made 11 starts for a total of 70.1 innings pitched. He has surrendered 57 hits (.216 opponents’ batting average) and 24 walks with 65 strikeouts.

In game-two, the Terrapins will start junior righthander Jake Stinnett (5-4, 3.35 ERA) on the mound. The Vista, CA native has made seven starts and seven relief appearances for a total of 48.1 innings pitched. He has given up 38 hits (.220 opponents’ batting average) and 19 walks with 39 strikeouts.

Clemson will counter with freshman lefty Matthew Crownover (5-1, 2.40 ERA) on Sunday. The Ringgold, GA native has made 10 starts and one relief appearance for a total of 48.2 innings pitched. He has surrendered 47 hits (.261 opponents’ batting average) and 12 walks with 29 strikeouts.

In game-three, Maryland will start freshman lefthander Alex Robinson (1-2, 4.01 ERA) on the mound. The Hewlett, NY native has made 11 starts for a total of 51.2 innings pitched. He has yielded 52 hits (.272 opponents’ batting average) and 36 walks with 42 strikeouts.

The Tigers’ starting pitcher for game-three on Monday has yet to be determined.

The TerrapinsMaryland, led by first-year Head Coach John Szefc, enters the series at #14 Clemson with a 27-21 overall record and an 8-16 ACC mark after defeating Towson 11-3 at home on Tuesday and Liberty 4-2 on the road on Wednesday. The Terrapins, who are also coming off two wins in three games at Duke over the weekend, have won six of their last seven games and are 9-11 on the road in 2013.

Maryland, who is 8-10 in one-run games, is averaging 5.7 runs per game and hitting .279 with a .382 slugging percentage and .379 on-base percentage thanks to 187 walks and 80 hit-by-pitches against 277 strikeouts. The team has also totaled 105 doubles, 14 triples, 10 home runs, 75 sacrifice bunts, and 91 stolen bases in 114 attempts. The Terrapins entered the weekend first in the nation in sacrifice bunts, tied for fifth in doubles, and eighth in hit-by-pitches.

The TigersClemson, ranked as high as #14 in the nation, enters the series against Maryland with a 30-14 overall record and 15-9 ACC mark after defeating #19 Georgia Tech twice in three games at home last weekend. The Tigers, who will be coming off a six-day break for final exams, are 20-8 at home in 2013. Clemson has won 14 of its last 17 games overall and 10 of its last 13 ACC games as well.

Tyler Slaton is hitting a team-best .320 with a .399 on-base percentage, while Garrett Boulware is hitting .315 with seven doubles, one triple, seven homers, and 37 RBIs. Shane Kennedy has two home runs, five doubles, three triples, 22 RBIs, and 11 steals. Thomas Brittle has added a team-high 15 steals as well.

The pitching staff has a 3.06 ERA and .260 opponents’ batting average in 400.0 innings pitched. The staff has allowed 137 walks against 284 strikeouts, good for a 2.07 strikeout-to-walk ratio. Junior righthander Matt Campbell has six of the team’s 12 saves, while senior righty Scott Firth has three saves. The Tigers are fielding at a .972 clip as well.

Gossett Holding His Own on FridaysIn many head-to-head matchups on Fridays against some of the best starting pitchers in the ACC, Daniel Gossett has held his own. In his eight ACC starts, all in game-one of series, he is 6-1 with a 2.92 ERA and .222 opponents’ batting average in 52.1 innings pitched. He has wins over #8 N.C. State, Duke, Boston College, Wake Forest, Miami (FL), and #19 Georgia Tech. He would have had another win against #12 Virginia, but with Gossett out of the game, the Tigers blew a three-run lead in the ninth inning.

Top-ranked North Carolina touched Gossett up for eight runs on 10 hits in 3.0 innings pitched on March 30. In his other seven ACC starts, he is 6-0 with a 1.64 ERA and .189 opponents’ batting average.

McGibbon Stellar in the FieldJunior first-baseman Jon McGibbon (Lindenhurst, NY) has saved many errors for his fellow infielders with his ability to scoop low throws out of the dirt in 2013. He has started all 44 games at first base and has committed just one error in 429 chances, good for a stellar .998 fielding percentage. At the plate, he is hitting .247, but has 28 RBIs, second-most on the team.