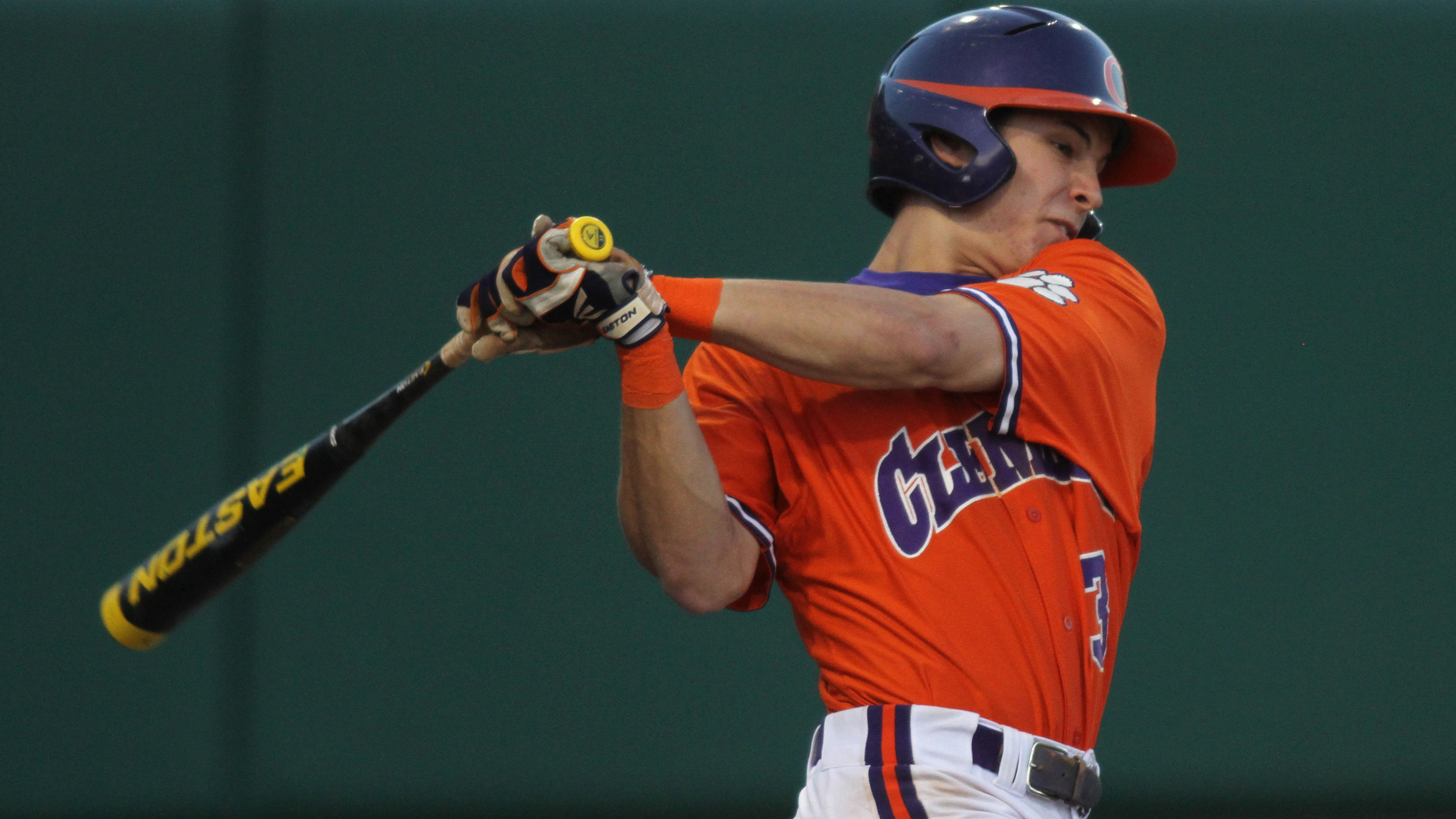 Military Appreciation Day on FridayClemson will honor our nation’s military service men and women with Military Appreciation Day during Friday’s games against Georgia Tech. A pregame ceremony prior to the first game of the doubleheader will recognize Clemson’s ROTC cadets and Marine Corps candidates along with soon-to-be commissioned officers in the armed forces.

The SeriesClemson and Georgia Tech have met 210 times, with the Tigers holding a 105-102-3 lead in the series dating to the 1902 season. The two teams have faced each other at least one time every year since 1974.

Last year at Russ Chandler Stadium, the Tigers won the final two games by scores of 13-7 and 11-8 after Georgia Tech won game-one 6-5 in 13 innings. Then in the ACC Tournament at Greensboro, NC, the Yellow Jackets defeated Clemson 5-1.

The Tigers hold a 45-23-1 lead over the Yellow Jackets in games played at Clemson and a 35-16 advantage at Doug Kingsmore Stadium. Clemson also holds a 48-42 advantage in ACC regular-season games. Jack Leggett has a 40-33 record against Georgia Tech as Clemson’s head coach, including a 19-7 mark at Doug Kingsmore Stadium. Leggett was 3-5 against the Yellow Jackets as Western Carolina’s head coach, meaning he is 43-38 all-time against Georgia Tech.

The Starting PitchersIn game-one, Georgia Tech will start senior righthander Buck Farmer (7-2, 2.22 ERA) on the mound. The Conyers, GA native has made 10 starts for a total of 69.0 innings pitched. He has allowed 58 hits (.233 opponents’ batting average) and 16 walks with 79 strikeouts.

The Tigers will counter with sophomore righty Daniel Gossett (6-2, 2.56 ERA) on Friday afternoon. The Lyman, SC native has made 10 starts for a total of 63.1 innings pitched. He has surrendered 52 hits (.218 opponents’ batting average) and 22 walks with 61 strikeouts.

In game-two, the Yellow Jackets will start junior righty Dusty Isaacs (4-4, 4.31 ERA) on the mound. The Lebanon, OH native has made 10 starts and one relief appearance for a total of 54.1 innings pitched. He has given up 50 hits (.248 opponents’ batting average) and 17 walks with 46 strikeouts.

Clemson will counter with freshman lefty Matthew Crownover (5-1, 2.28 ERA) on Friday night. The Ringgold, GA native has made nine starts and one relief appearance for a total of 43.1 innings pitched. He has surrendered 41 hits (.256 opponents’ batting average) and 11 walks with 23 strikeouts.

The Tigers will counter with freshman righthander Clate Schmidt (3-2, 4.53 ERA) on Saturday. The Acworth, GA native has made nine starts and two relief appearances for a total of 45.2 innings pitched. He has surrendered 65 hits (.339 opponents’ batting average) and 20 walks with 22 strikeouts.

The Yellow JacketsGeorgia Tech, led by 20th-year Head Coach Danny Hall and ranked as high as #19 in the nation, enters the series at #13 Clemson with a 27-14 overall and an 11-10 ACC mark after falling to Georgia 17-0 at Turner Field in Atlanta on Tuesday night. The Yellow Jackets, who were also swept at home by N.C. State last weekend, are 7-6 on opponents’ home fields in 2013.

The pitching staff has a 4.22 ERA and .258 opponents’ batting average along with 303 strikeouts against 141 walks in 360.0 innings pitched. Evans, a junior righthander, has three of the team’s five saves along with a 2.70 ERA in 10.0 innings pitched over eight relief appearances. Georgia Tech, who has allowed 42 steals in 59 attempts, is fielding at a .975 clip as well.

The TigersClemson, ranked as high as #13 in the nation, enters the series against #19 Georgia Tech with a 28-13 overall record and 13-8 ACC mark after defeating Western Carolina (12-0) at home on Wednesday night. The Tigers, who are also coming off one win in three games at Miami (FL) over the weekend, are 18-7 at home in 2013.

Tyler Slaton is hitting .333, while Garrett Boulware is hitting .315 with six doubles, one triple, seven homers, and 35 RBIs. Shane Kennedy has added a .314 batting average and a team-best .402 on-base percentage. Thomas Brittle has a team-high 15 steals as well.

The pitching staff has a 3.03 ERA and .257 opponents’ batting average in 371.0 innings pitched. The staff has allowed 126 walks against 257 strikeouts, good for a 2.04 strikeout-to-walk ratio. Junior righthander Matt Campbell has six of the team’s 12 saves. The Tigers are fielding at a .972 clip as well.

Costigan the Top Tiger Off the BenchJunior outfielder Joe Costigan (Naples, FL) has made the most of his limited opportunities in 2013. He is 10-for-29 (.345) with five doubles, one triple, six RBIs, four runs, and four walks in 14 games (seven starts). He has a .424 on-base percentage and .586 slugging percentage thanks to his six extra-base hits in only 29 at-bats.

In the Boston College series in Chestnut Hill from April 5-7, he went 4-for-8 with three doubles, four RBIs, and a walk in three games (two starts) to help the Tigers to a sweep. In game-one, he hit a three-run double in the seventh inning in Clemson’s 7-5 victory.