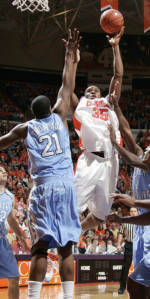 Tigers to Play Host to Boston College Saturday at Noon

Quick Facts  This will be Boston College’s first appearance at Littlejohn Coliseum as an ACC school. They were in the Big East when they made their only other appearance in 2003-04.

 Clemson won the only previous meeting between the two schools at Littlejohn, 72-62 in Oliver Purnell’s first year. That was quite an upset as Boston College entered the game 9-1 and went on to a 24-10 season. Clemson would win just 10 games that year.

 Current senior Vernon Hamilton had his best allaround game as Tiger when Clemson faced Boston College in 2003-04. As a freshman, Hamilton had 13 points, 11 rebounds and nine assists, missing a triple double by just one assist. The assist and rebound totals are still career highs.

 Boston College will be without its top shot blocker, Sean Williams, who has been suspended for the rest of the season. He ranked third in the nation in blocked shots through games of Monday night with 5.0 per game.

 Clemson had 20 steals against North Carolina in a losing effort. It was the most steals in Clemson history in an ACC game. Vernon Hamilton led the Tigers with six steals, tying his career high and tied for the most by a Tiger in the Oliver Purnell’s era.

 K.C. Rivers saw his double figure scoring streak end at 18 straight games when he had just four points against North Carolina. Rivers played the game with a back brace after suffering an injury at Maryland last Saturday. Rivers had made 8 of his last 9 three-point shots entering the North Carolina game, but shot 2-9 against the Tar Heels overall. Rivers is tied for second in the ACC in made threepoint goals per game with 2.74 and is third in percentage at .433.

 Clemson has won the points off turnover statistic in 18 of its 19 games this season.

 James Mays has scored at least 14 points in five straight games and is averaging 16.6 points per game over that time.

 A victory on Saturday over Boston College would give Clemson four wins in the month of January for the first time since 1997 when it was 6-2 in January on the way to a 23-win season. That was also the last year Clemson started the ACC season 4-2.