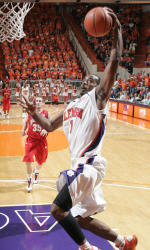 Tigers to Open Play vs. Georgia Tech in First Round of 2009 ACC Men’s Basketball Tournament

 Clemson will face a Georgia Tech team the Tigers have beaten twice this year in Tech’s hometown of Atlanta. Clemson was in this situation in 2005 when it faced Maryland in Washington, DC after beating the Terps twice in the regular season. Clemson won that ACC Tournament game as well.

 This is just the third time Clemson has played Georgia Tech in the ACC Tournament and the Jackets have a 2-0 lead, wins in 1986 and 1993.

 Trevor Booker is the only ACC player averaging a double-double this year in ACC games.

 Clemson has reached the championship game of the ACC Tournament just twice, 1962 and 2008.

 Trevor Booker both made first-team All-ACC tournament in 2008, helping the Tigers to the championship game. Rivers scored 28 points in the title game loss to North Carolina.

 Clemson has 72 wins over the last three years, third best among ACC teams and just three less than Duke (75).

 Clemson is 13-0 this year when it has more assists than turnovers. Clemson has won the points off turnover stat in 23 of the 30 games this year.