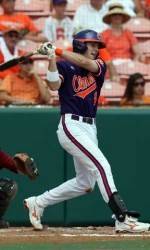 Tigers Advance to the College World Series With back-to-back wins over #16 Alabama in the Clemson Super Regional, Clemson advanced to the College World Series for the 12th time in school history. The Tigers will open up with #1 national seed Arizona State (52-8) on Sunday at 7:00 PM EDT on ESPN2. Mike Patrick, Robin Ventura, and Erin Andrews will call the game on ESPN2.

In 2002, the Tigers beat Nebraska and Georgia Tech before losing twice to South Carolina. That team featured unanimous National Player-of-the-Year Khalil Greene. In 2000, Clemson downed San Jose State in its first game, but then fell to Stanford and Louisiana-Lafayette.

In 1996, Clemson went 2-2, including dramatic victories over Oklahoma State and Alabama. The 1996 team featured the likes of National Player-of-the-Year Kris Benson and All-American Billy Koch, both future Major League righthanders and both top-four draft picks. In 1995, Clemson lost both of its games.

Head Coach Wilson Boyd was the only member of Clemson’s last College World Series team in 2006, as he red-shirted that season and did not make the trip.

Omaha on Tigers’ Mind Omaha is on the minds of the players every day. All of their hats have the word “Omaha” stitched inside the Tiger Paw on the back of their caps. On their way in and out of the clubhouse from the dugout at Doug Kingsmore Stadium, players and coaches touch a home plate that hangs on the wall. The plate is a memento from one of the Tigers’ CWS appearances in the 1990s that Head Coach Jack Leggett had dug up from Rosenblatt Stadium. The 2010 team is hoping to add its own memorabilia to the Clemson baseball tradition.

Clemson is hitting .349 with a .564 slugging percentage and .409 on-base percentage in seven NCAA Tournament games. The team also has 21 doubles, one triple, 12 homers, and four steals.

John Hinson has been Clemson’s hottest hitter in the NCAA Tourney. The sophomore is 14-for-28 (.500) with five homers, one double, 10 RBIs, 10 runs, three walks, and a steal in seven games. Freshman Richie Shaffer has added three long balls and 10 RBIs as well.

Clemson 5-1 Against CWS Field in 2010 Clemson owns a 5-1 record in 2010 against teams that have advanced to the College World Series. The Tigers have played just two of the seven teams in 2010. From March 3-5, Clemson won two of three games over #15 South Carolina by a combined score of 28-16. Clemson won the first game 4-3 at Doug Kingsmore Stadium before the Gamecocks rallied late to win 7-5 the next day at Fluor Field in Greenville, SC. In the series-finale at Carolina Stadium, Clemson downed South Carolina 19-6 behind two grand slams.

In the regular-season-finale, Clemson swept #7 Florida State in a three-game series at Doug Kingsmore Stadium by a combined score of 25-15. With the sweep, Clemson finished in a tie for first place with the Seminoles in the ACC Atlantic Division with an 18-12 record, as Clemson claimed the division title thanks to the sweep. The Tigers won by scores of 9-8, 8-4, and 8-3.

2010 CWS Clemson Connections Two head coaches in the 2010 College World Series have prominent ties to Tiger Head Coach Kevin O’Sullivan served as Clemson’s pitching coach under Leggett for nine seasons from 1999-07 and made three trips to the College World Series with the Tigers (2000,02,06). Also, TCU Head Coach Jim Schlossnagle served one season (1993) as an assistant coach at Clemson alongside Leggett, who at the time was also an assistant under Head Coach Bill Wilhelm. Leggett became Clemson’s head coach in 1994.

Scouting Arizona State Number-one national seed and top-ranked Arizona State (52-8) enters the College World Series after winning both games over Arkansas in the Tempe Super Regional last weekend. Arizona State, who is 4-0 in neutral-site games, had a 20-7 record during its conference regular season, as it finished atop the Pac 10 standings.

Arizona State is led by first-year Head Coach Tim Esmay. The team won its first 24 games of the year and is riding a current six-game winning streak. The Sun Devils have not lost back-to-back games all season.

The pitching staff has a 3.14 ERA (third-best in the country) and .239 opponents’ batting average. The staff has allowed 160 walks against 537 strikeouts, good for a 3.36-to-1 strikeout-to-walk ratio.

Junior righthander Seth Blair (12-0, 3.35 ERA) is scheduled to start on the mound against the Tigers on Sunday. The Rock Falls, IL native, who is fourth in the nation in wins, has made 17 starts for a total of 102.0 innings pitched. He has allowed 105 hits (.269 opponents’ batting average) and 24 walks with 104 strikeouts. Sophomore righty Jordan Swagerty is 2-0 with a 2.06 ERA and 14 saves (third-most in the nation) in 33 relief appearances. Sophomore lefthander Mitchell Lambson has 90 strikeouts against only 18 walks and 38 hits (.162 opponents’ batting average) in 68.2 innings pitched as well.

Scouting Clemson Clemson (43-23), ranked as high as #8 in the nation, enters the College World Series coming off two wins in three games over #16 Alabama in the Clemson Super Regional last weekend. Clemson was 18-12 during the ACC regular season, finishing atop the Atlantic Division standings.

The Tigers, who are 4-3 in neutral-site contests, are led by 17th-year Head Coach Jack Leggett. His 767 wins are seventh-most in college baseball during his tenure. The Tigers are also 11-10 against top-25 ranked teams in 2010.

Junior lefthander Casey Harman (7-3, 3.73 ERA), who is scheduled to start against #1 Arizona State on Sunday, is Clemson’s top starting pitcher. The South Burlington, VT native has made 17 starts for a total of 108.2 innings pitched. He has allowed 101 hits (.245 opponents’ batting average) and 31 walks with 95 strikeouts. Junior righty Alex Frederick is 7-2 with two saves and a 3.90 ERA in 57.2 innings pitched over a team-high 30 appearances (one start). Freshman righthander Tomas Cruz has a team-high three saves. Clemson is fielding at a .963 clip as well.

Scouting Oklahoma Oklahoma (49-16), ranked as high as #6 in the nation, enters the College World Series coming off two wins in three games over Virginia in the Charlottesville Super Regional. Oklahoma, who is 8-3 in neutral-site games, had a 15-10 record during its conference regular season, as it finished second in the Big 12 standings.

Oklahoma is led by fifth-year Head Coach Sunny Golloway. The team won 20 of its first 22 games of the season, but lost nine of its next 16 games. However, the Sooners have rebounded to win 22 of its last 27 games.

Garrett Buechele is hitting .371 with 16 homers and 64 RBIs, while Chris Ellison is batting .335 with a team-high 23 steals. Cameron Seitzer and Max White have both slugged 15 home runs, while Cody Reine has added 10 long balls.

Scouting South Carolina South Carolina (48-15), ranked as high as #5 in the nation, enters the College World Series coming off two wins in two games over Coastal Carolina in the Myrtle Beach Super Regional. South Carolina, who is 1-2 in neutral-site games, had a 21-9 record during its conference regular season, as it finished second in the overall SEC standings.

South Carolina is led by 14th-year Head Coach Ray Tanner. The Gamecocks won 19 of their first 23 games of the season. After losing four of five games, the Gamecocks have won all five of their NCAA Tournament games.

Jackie Bradley, Jr., who is riding a 16-game hitting streak, is hitting .371 with 11 homers and 51 RBIs, while Whit Merrifield is batting .327 with 12 long balls and a team-high 12 steals. Nine Gamecocks have totaled at least seven home runs as well.

The pitching staff has a 3.61 ERA (ninth-best in the country) and .230 opponents’ batting average. The staff has allowed 208 walks against 568 strikeouts, good for a 2.73-to-1 strikeout-to-walk ratio.

Polls The Tigers moved up five spots to #8 in the Collegiate Baseball poll this week after going 2-1 in the Clemson (SC) Super Regional last weekend. Clemson is #20 in the Sports Weekly coaches poll and is not ranked in the Baseball America ranking. Neither Sports Weekly nor Baseball America released a new poll this week and will release their next poll after the College World Series.

With Clemson’s top-25 ranking this week, it marks the 36th week in a row the Tigers have been ranked in the top 25 of at least one of the three major polls dating to the start of the 2009 season.

After earning MVP honors of the Auburn Regional, Hinson was 5-for-12 (.417) with two homers, five RBIs, five runs, two walks, and a steal in the three games of the Clemson Super Regional.

In the second game of the Clemson Super Regional on June 13, Clemson scored six runs in the first inning and nine runs in the sixth inning to defeat Alabama 19-5. Clemson, who totaled 20 hits, had six players with at least two hits and seven with at least two runs. Hinson and Shaffer hit back-to-back solo homers in the third inning, then Miller added a grand slam in the sixth inning. Schaus went 4-for-6 with three RBIs and Miller went 4-for-5 with three runs. Freeman added three hits, while Shaffer totaled four RBIs. Clemson also went 10-for-18 with runners in scoring position in the game. Starter Scott Weismann earned the win in 6.0 innings pitched.

In the third game of the Clemson Super Regional on June 14, Clemson built an 8-1 lead and withstood a nine-inning rally to defeat Alabama 8-1 and advance to the College World Series. Hinson hit a two-run homer in the second inning to give the Tigers the lead for good, then Shaffer added two long balls. But Alabama scored five runs in the ninth inning and had the potential tying run on second base before Jake Smith flied out to left to end the game. Clemson outhit the Crimson Tide 16-8 and was led by Hinson, who was 3-for-5 with two RBIs. Every Tiger starter had at least one hit as well. Will Lamb retired the only batter he faced to record the save.