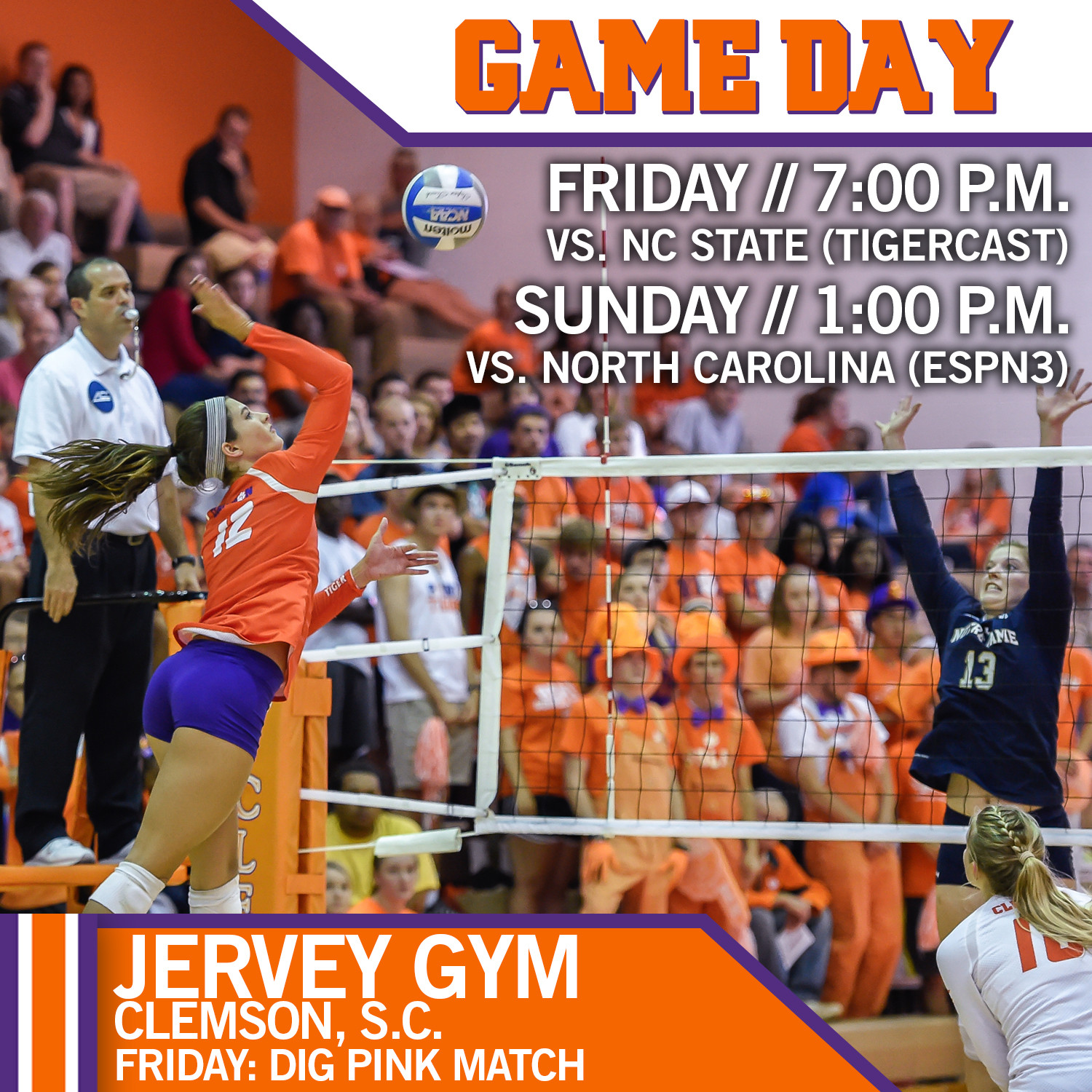 Tigers To Host Wolfpack And Tarheels

CLEMSON, S.C. – Clemson is back in Jervey Gym this weekend playing host to NC State and North Carolina. The Wolfpack is first on the docket for the Tigers as they will face off on Friday at 7:00 p.m., in Clemson’s annual Dig Pink Match. The weekend will conclude with a 1:00 p.m., matchup with the Tar Heels.

“NC State is a really balanced team, with two middles that score at a high rate,” said head coach Hugh Hernesman. “I don’t know the reason for their struggles, I watched them on film and they look really good. They pushed Florida State and Miami this weekend and those are two great programs, two solid teams that are NCAA Tournament teams right now.”

North Carolina presents one of Clemson’s toughest tests this season as the Tar Heels were picked by their ACC peers to repeat as ACC Champions this season.

“North Carolina is a program that is battle tested. They’ve been a very good program for a number of years now so they’re another great challenge for us.”

“We talked to the team Sunday after our match and we talked about how every single one of these opportunities is an opportunity for you to get better and you have to appreciate that a team is going to push you out of your comfort zone and push you to a place where you have to change what you do, adapt and improve. Every time we do that we get a little bit better so this is another chance for us to be pushed to a new level by two very good teams.”

The Tigers recently have thrived off of the energy of freshman middle, Megan McGinley. The Chagrin Falls, Ohio native has hit .311 in the last four matches with 27 kills and 14 blocks.

“Not only for Megan, but our whole team, it’s a process. We’re not losing sight of that. We see her improving, we see our team improving and that’s where we grade ourselves week-to-week. We feel that improvement is there, it’s showing with Megan.”

The stretch includes career-best blocking, and attacking efforts by McGinley. She denied six Notre Dame attacks two weeks ago and then most recently hit .529 with nine kills on 17 errorless attempts.

“She’s made some nice progress over the last few weeks so I’m sure she’ll attract some attention now. This is a very reactionary game, from week-to-week teams scout and see who’s doing well and see what teams are doing and they’ll try to make you change what you’re doing. That’s part of playing in a great conference with great coaches.”

Setting her was McGinley’s classmate and fellow Ohio native, Taylor Daniel. The setter out of Russia, Ohio connected for 43 assists in her first two collegiate starts this past weekend against Virginia Tech and Pittsburgh.

“I think Taylor and Megan have a really good connection. I think those two are on the same page and one of Taylor’s strengths is that she sets the middles pretty well.”

“Our other freshmen got to work through that preseason and early season jitters in the first few weekends where maybe not as much is at stake, but Taylor didn’t get that opportunity. She’s had to do it on the fly against a couple of teams that are looking at competing in the NCAA Tournament this year. That’s not an easy task for any freshman to come in any league and play and make an impact, never mind try to do it in one of the best conferences in the country.”

“The team likes playing for her, they see how hard she works and I think that goes a long way. It’s great to see all of these young players because they grow so fast, they still have so much room to grow and that happens a lot faster when you have the support of your teammates and I think that has really helped Taylor. She’s responding in a really good way.”

Notes (in 140 characters or less) • Clemson’s eight freshmen is the highest total in the Atlantic Coast Conference.• Hugh Hernesman is the ninth head coach in Clemson volleyball history.• Clemson is currently sixth in the ACC, averaging 14.69 digs per set.• Keelie Arneson’s 15 digs against #17 Florida State broke her into the NCAA’s list of all-time career dig leaders.• Keelie Arneson is the NCAA’s active career digs leader with 2,485 digs. The total ranks her 14th all-time in NCAA history.• Keelie Arneson is the 36th Clemson student-athlete to be recognized as one of the NCAA’s career leaders in a statistical category.• If Keelie Arneson duplicates her ‘13 performance (712 digs) she will have the second most digs ever recorded in D-I women’s volleyball.• Keelie Arneson ranks 23rd in NCAA history with a career 5.31 digs per set average.• Keelie Arneson currently leads the ACC with 354 digs and a 5.13 digs per set average.• Keelie Arneson’s 5.13 digs per set average ranks her 17th in the nation and is the second best average in a power five conference.• Leah Perri recorded her 900th career kill against Pittsburgh.• Leah Perri headlines the Clemson attack with 247 kills in 2015 which is the eighth most in the ACC.• Leah Perri ranks eighth in the conference with a 3.48 kills per set average.• Leah Perri is ninth in the ACC with 282 points and is seventh with 3.97 points per set.• Leah Perri has double-digit kills in 14-of-20 matches this season.• Kate Federico ranks seventh in the conference averaging 8.66 assists per set.• Kate Federico ranks tenth in the conference with 563 assists.• Kate Federico has eight double-doubles this season and 11 matches with 30 assists or more.• Kate Federico’s 1,171 assists last year are the second most ever recorded by a Clemson freshman.• Kate Federico’s 1,171 assists in 2014 was the second highest total in the ACC and the most recorded by a freshman.• Kailey Harvell has recorded 10 or more kills in 11 of Clemson’s 20 matches this season.• Kailey Harvell is second on the team and not far behind Leah Perri with 205 kills and a 2.89 kills per set average.• Kailey Harvell hit .484 on the outside (16-1-31) two weeks ago against Miami.• Kailey Harvell is credited with a career best 17 kills, and five aces to go along with eight digs against Syracuse.• Kennedy Wilson-Talmadge recorded her first career match with 10 digs or more, digging 16 balls against Syracuse.• Kennedy Wilson-Talmadge has 101 digs in 57 sets, which is the most digs of Clemson’s reserves.• Kennedy Wilson-Talmadge is 11 digs away from the fourth highest total on the team with 14 fewer sets.• Freshman, Kennedy Wilson-Talmadge recorded her 100th career dig against Pittsburgh.• Megan McGinley has hit .311 with 27 kills on 61 attempts in the last four matches with 14 blocks.• Megan McGinley’s career-best six blocks against Notre Dame on Friday contributed to her 11 on the weekend in eight sets of work.• Taylor Daniel tallied 43 assists and 16 digs in her first two collegiate starts with a career-best 22 against Virginia Tech.• Sydney Moseley leads the Tigers with 18 service aces. She’s recorded an ace in five-straight matches.• Alex Lynch enjoyed the best weekend of her collegiate career with six kills on 18 attempts with two blocks in six sets.