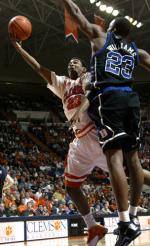 Clemson has a 13-3 record, Clemson’s best record after 16 gamessince the 1996-97 season when Clemson opened 15-1. That was alsothe last season that Clemson defeated Duke. This is the 10th timein school history that Clemson has won 13 of its first 16 games.Clemson has a 2-1 conference record, the first time Clemson has wontwo of its first three league games since the 2001-02 season whenthe Tigers opened 2-1. Clemson has not been 3-1 or better to openan ACC season since 1996-97 when Rick Barnes team opened a schoolbest 5-0. Clemson has lost 18 straight games to Duke dating to an86-82 overtime win at Clemson in 1996-97. Duke has been ranked inthe top 10 entering all 18 of those games. Duke enters Saturday’sgame ranked number-one in the nation. Clemson has beaten thenumber-one ranked team twice in history. Clemson’s wins overnumber-one took place on January 9, 1980, an 87-82 overtime victoryagainst Duke, and Feb. 18, 2001, a 75-65 win over North Carolina.Clemson has a +3.68 turnover margin, fourth best in the ACC and afigure that would rank third best in Clemson history for a season.Clemson is forcing 19.5 turnovers per game, second best in the ACCand at a pace to rank second best in Clemson history over a season.Clemson’s 11.31 steals per game rank ahead of the single seasonrecord of 10.89 set in 1976-77. Clemson 10 blocked shots and 15steals in the win over Wake Forest, just Clemson’s second win overthe Demon Deacons in the last 14 meetings. It marked the first timesince 1989-90 that Clemson had at least 10 blocks and 15 steals inthe same game. That came against Radford, a team that was coachedby Oliver Purnell. Clemson ranks in the top 25 in the nation inblocked shots (21) and steals (5). Clemson was the only team in thenation to rank in the top 20 of both categories last season. Pointguard Vernon Hamilton, a native of Richmond, VA, is Clemson’sscoring leader with a 12.5 average. He talled a career high 21points in the victory over Wake Forest. He has 12 double figurescoring games in the first 16 contests after recording just eightdouble figure games all of last year. Shawan Robinson has 27three-point goals and 167 for his career. He needs just one to gopast Chris Whitney (167) into third place on the Clemson careerlist. Freshman Raymond Sykes had three blocked shot sin 15 minutesagainst Wake Forest. He had just two blocks in six games prior tothat contest.