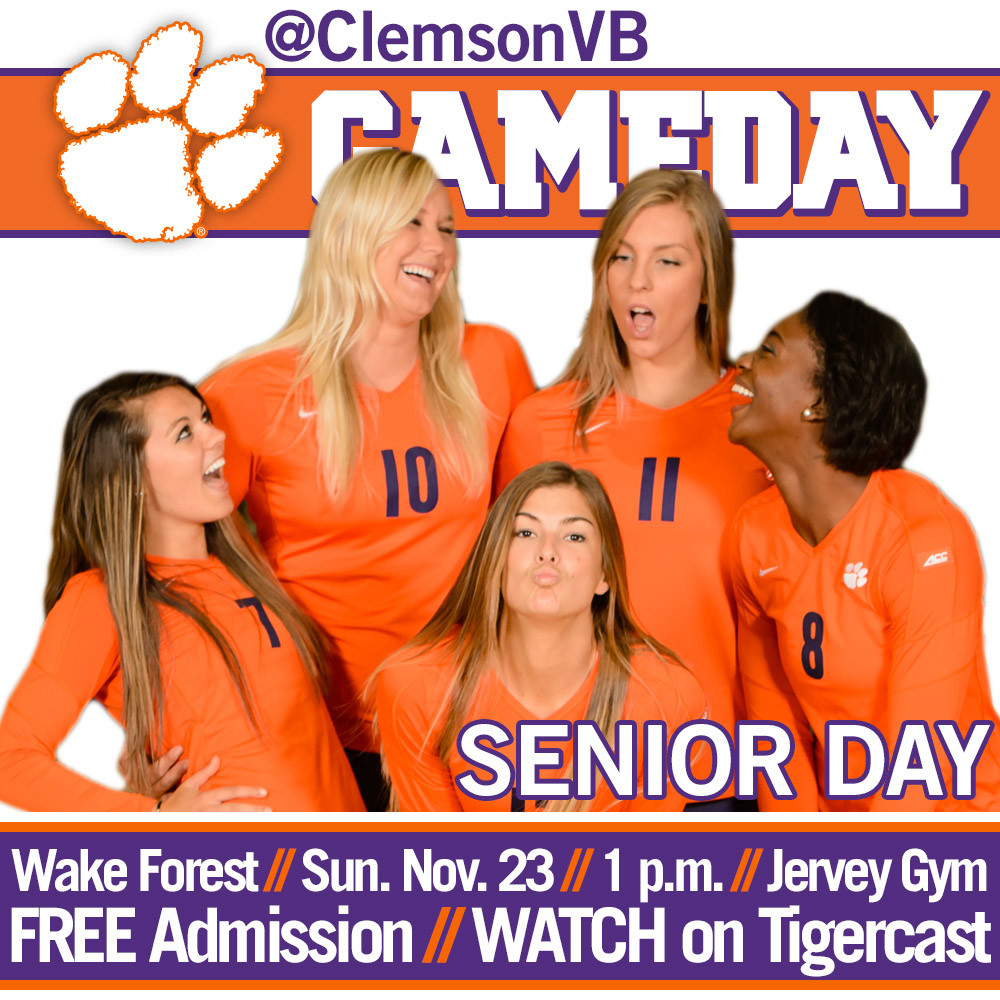 CLEMSON, S.C. – The Clemson volleyball team hosts Wake Forest on Sunday at 1 p.m. in its final home game of the regular season. Prior to the match, the Tigers will honor seniors Niki Collier, Beta Dumancic, Kristin Faust, Haleigh Hampton and Karis Watson as they play their final home game in Jervey Gym. The team will also celebrate Parents Day on Sunday, and will honor the parents of all Tiger volleyball players in attendance. Admission is free, and the pregame Senior Day ceremony and the match will be broadcast live on ClemsonTigers.com.

The Tigers improved to 18-11 overall and 6-9 in the ACC after falling to Louisville and defeating NC State at home last weekend. In the latest conference statistical rankings, Clemson is third in the conference in opponent hitting percentage (.175) and also third in blocks per set average (2.89).

Watson has had an impressive senior season at the net, amassing 162 total blocks and a 1.47 blocks per set average, which put her at fourth and 12th in the nation, respectively, in the two categories.  The 162 blocks also lead the ACC, while the 1.47 blocks per set are fourth in the conference. Fellow senior Dumancic also ranks in the conference’s top 10 in both categories, as she is tied for third in total blocks (132) and 10th in blocks per set (1.20). Collier leads the team in backcourt defense with a 3.58 digs per set average, which is ninth in the ACC.

Offensively, the Tigers are led by Faust, who ranks seventh in the ACC with 3.52 kills per set. Freshman setter Kate Federico now has 1,081 assists in her freshman campaign, which puts her in third place in school history in terms of single season assists by a freshman. The rookie needs just 36 assists to pass current assistant coach Kelsey Murphy Saberhagen and move into second place in the category. Federico’s 9.83 assists per set average ranks fifth among conference setters.

The Demon Deacons are 15-13 overall and 5-9 in conference play, and are coming off wins over Notre Dame and Louisville in Winston-Salem last weekend. Jazmen Russell (4.45 kills per set) leads the team offensively, and currently ranks second in the ACC in that category. Danae Rosendall and Sophia Dodd average 7.60 and 7.26 assists per set, respectively, for Wake Forest. On the defense, Caroline Wolf has 4.35 digs per set and Matalee Reed has 0.89 blocks per set to lead the team. The Demon Deacons face Virginia Tech on the road on Friday night before traveling to Tigertown on Sunday.

The Tigers and Demon Deacons have met 43 times in series history, and Clemson has won 31 of those match-ups. The Tigers also boast a 14-7 record in contests played in Jervey Gym, and have won the last six meetings between the two teams.