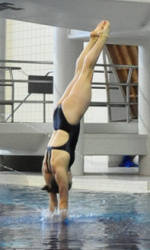 Tigers to Face Gamecocks for Final Time in Pool

GREENVILLE, SC — The Clemson men’s and women’s swimming teams will take on rival South Carolina for the final time this weekend. The men’s and women’s diving teams from both schools will compete on Friday afternoon in Columbia, and the swimming portion of the meet will begin Saturday at noon at the Westside Aquatic Center in Greenville. Admission is free to the public.

“Going against your rival is always a great opportunity to elevate everyone’s performance levels,” Head Coach Christopher Ip said. “Our team must focus on the battles that we can control. We can’t go in thinking about a team win against USC, and that’s a hard pill to swallow as an athlete. But if we can win each of our individual battles and adapt to the limitations give to us, we will put our teams into position to be successful.”

The Tigers are currently 4-0 on the women’s side and 3-0 on the men’s side coming into the meet. The teams have swept Davidson, Limestone, and the Savannah College of Art and Design. The Clemson women’s team also defeated Georgia Southern last weekend.

Meanwhile, the Gamecocks come into this weekend’s meet with a 2-1 record on the women’s side and a 1-2 mark on the men’s side. The two teams have swept Georgia Tech and been swept by Florida State. The women defeated Alabama in Tallahassee, while the men were downed by the Crimson Tide.