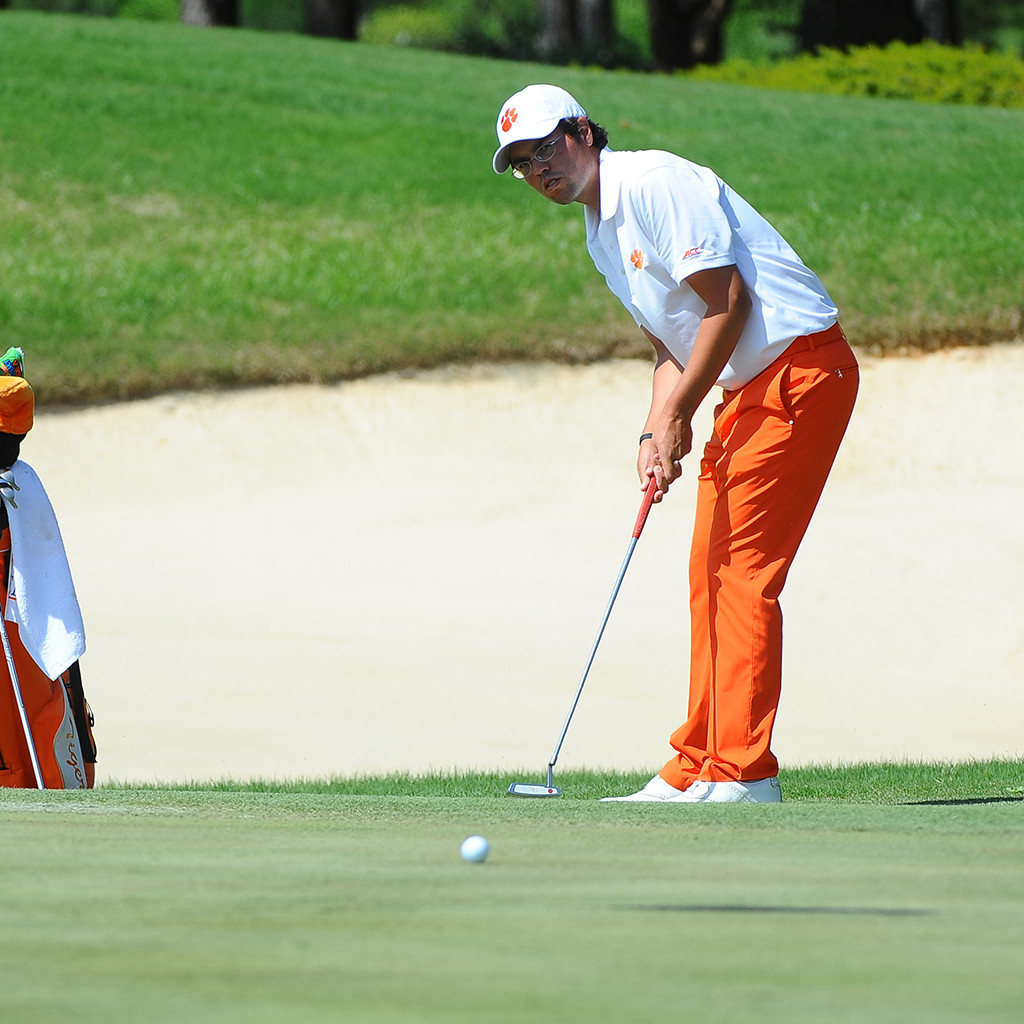 Tigers Tied for Third after Day One of NCAA Regional

Chapel Hill, N.C.—Billy Kennerly fired a five-under-par 67 on Thursday, the second best round in the field of 75 golfers,  to lead Clemson to a 284 team score and a tie for third place after the first round of the NCAA Chapel Hill Regional at the Finley Golf Club.  The top five teams in the 13-team field after Saturday’s third round will advance to the NCAA Championship in Bradenton, Fla on May 29.

Charlotte, ranked 50th in the latest Golfstat ranking, was the surprise leader after the first round with a a 13-under par team score of 275. Florida was second at seven-under-par 281.   Clemson and number-one ranked FloridaState are tied for third at 284.  Host school North Carolina is fifth at two-under-par 286.  KennesawState stands one shot off the cutline at one-under-par 287. Stanford, the number-two seed in the tournament, is in seventh place at 290.

Kennerly’s round featured five birdies and no bogeys, including four birdies on the front side when he shot 32. Three of his five birdie putts were putts of  five feet or shorter, including a three-inch putt for birdie on the par five sixth hole.

“At the beginning of the season I said we needed more rounds in the 60s, and Billy’s 67 was an example of that,” said Head Coach Larry Penley, who has taken Clemson to the NCAA Tournament 32 consecutive years.  “Billy has been outstanding the entire year, but this is the third straight tournament he has had a round at 67 or better.”

“I had a lot of up and downs (scrambles)  on the front nine, then hit some irons close on the second nine (front nine on the course) and made some birdies,” said Kennerly.  “I kept the round together on the back nine (his first nine of the day) and that is a longer and tougher nine.  It was a good start.”

Kennerly received considerable help from Stephen Behr, who also graduated from Clemson last Friday, and sophomore Austin Langdale.  Both players had even par rounds. Langdale made two birdies and two bogeys, while Behr had three of each.

Cody Proveaux was Clemson’s fourth counter of the day.  The junior has been struggling off the tee and did not hit a fairway all day, but still shot a 73.  His shot of the day took place on his second shot on the par four ninth, his final hole.  After driving his tee shot in the left rough, he hit his second shot over a trap to within two feet of the pin.  He made the putt for birdie to finish one over par.

“Cody might have had the round of the day in that he did not hit the ball in the fairway, but still found a way to shoot just one over.  His shot on the last hole was the shot of the day.”

Miller Capps shot a two over par 74 and his score did not count towards the Clemson team score.  He had 14 pars, three bogeys and one birdie.

“Really our goal is to win the tournament. I told the team I wanted them to have that mindset. We are tied with the number-one seed and ahead of seeds 2-5, including the home team.  That is a good sign after day one.  But there is a lot of golf left.”