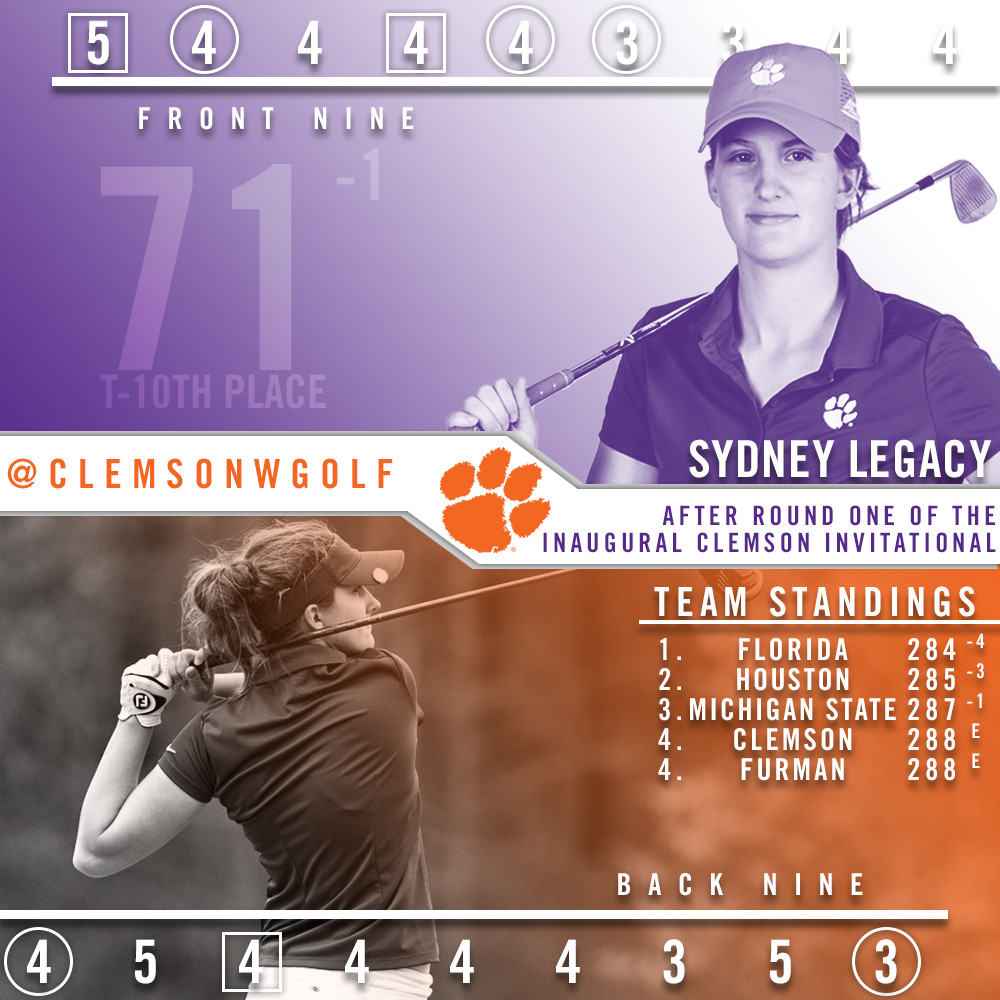 Tigers Tied for Fourth after First Round of Clemson Invitational

Sunset, S.C.—Sydney Legacy (71) , Marisa Messana (71) and Lauren Stephenson (72) all shot par or better to lead Clemson to a 288 team score and a fourth-place standing after the first round of the Clemson Invitational at The Reserve at Lake Keowee.  Clemson trails first-place Florida by just four shots entering the second round.

Florida is ranked eighth in the nation and fired a team score of 284, while Houston stands in second place at 285.  Michigan State is in third with a 287 score, one-under-par, while Clemson is tied with Furman at 288.  Clemson stands ahead of top 25 teams Tennessee (291) and Texas A&M (292) after the first round.

Legacy had her first under-par round as a Tiger with her 71 on Friday afternoon.   The junior college transfer from Lexington, S.C. had a career best four birdies, including one on the 18th hole.  She is tied for 10th after the first round in a field that includes 13 of the top 100 players in the nation.

Messana had a clean round with two birdies and just one bogey to go with 15 pars in shooting her third under par round of the year.  Her 15 pars tied for the second among the 79 players in the field. She is also in 10th place entering the second round.

Lauren Stephenson, coming off a second-place finish at the Briar’s Creek Invitational, had four birdies and four bogeys in posting an even par 72.  It ws her 10th round at par or better this season. She joined Legacy in scoring a birdie on the last hole.

Alice Hewson shot a two-over-par 74, while Sloan Shanahan had a 75. While Shanahan’s score did not count towards Clemson’s team score, she had an encouraging round with a three-under-par 33 on the back nine, the best nine hole score by a Tiger player on Friday.  She has been battling back programs this year.

Four Tigers played as individuals on Friday.  Jessica Hoang had a three-over-par 75, McKenzie Talbert posted a 79, Taylor Ramsey shot an 80 and Lauren Salazar had an 81.  Ramsey shot a 37 on the back nine, her first nine holes of the day.

Florida has the team lead with a 284 thanks to a 69 from Karolina Vickova and a 70 from Samantha Wager.  The individual  lead is held by Jennifer Hahn of Vanderbilt, who had a five-under-par 67 on Friday.  Katie Sharp of Michigan State is in second place with a 68.