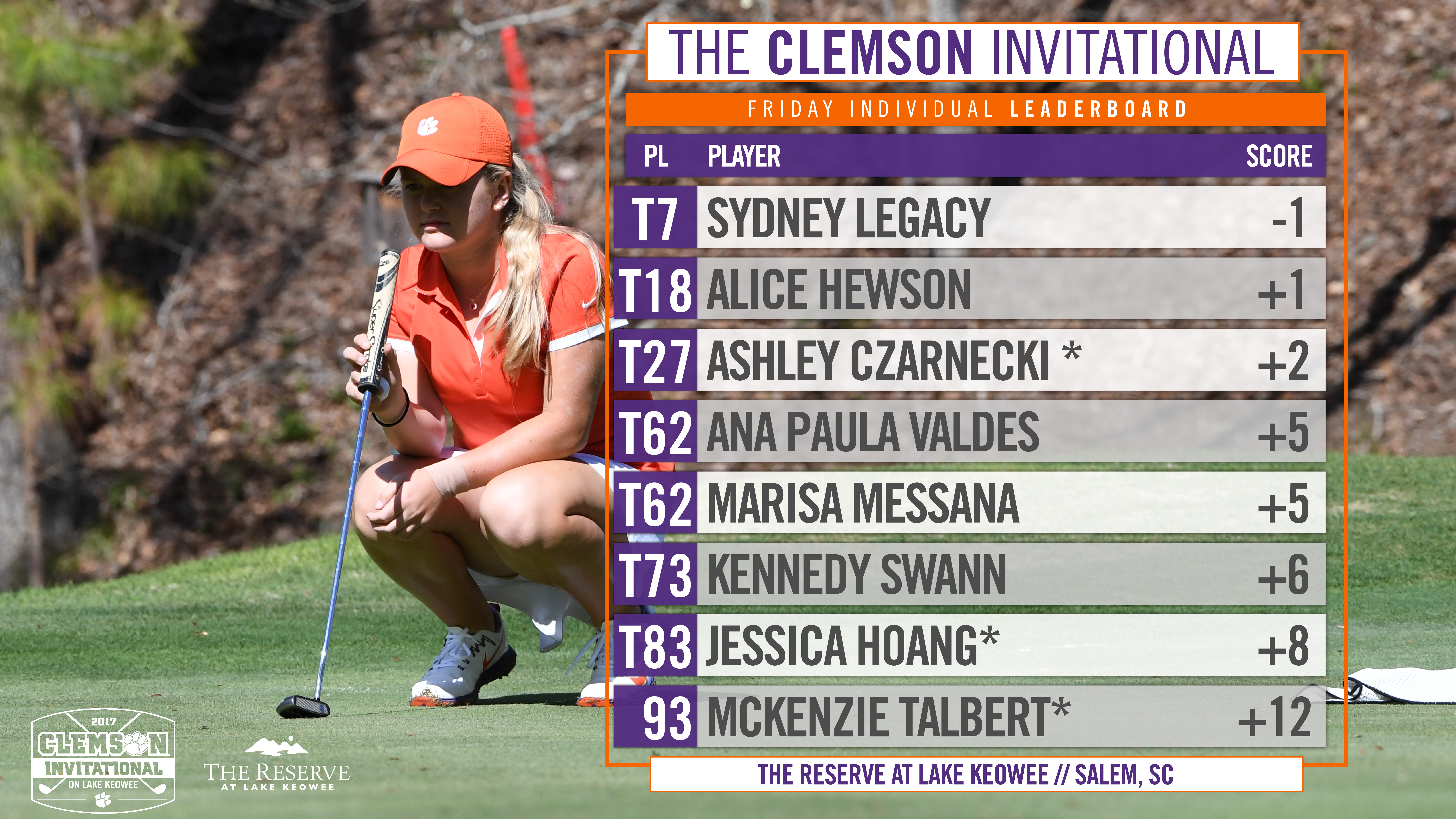 Tigers Tied for 10th after First Round of Clemson Invitational

Clemson, S.C.—Sydney Legacy shot a one-under-par 71 to lead Clemson to a 298 team score and a 10th place standing after the first round of the Clemson Invitational at The Reserve at Lake Keowee in Sunset, S.C.

Eighth ranked Furman holds the team lead by three shots in the 17-team tournament that includes seven of the top 30 teams in the nation. The field includes 23 of the top 100 players in the nation.   Furman’s Alice Chen has the lead by one shot after the first round with a four under par 68.

Furman’s first round score of 285 is three ahead of Michigan State, who was the only other team to score even par for the first 18 holes. Fifth ranked Florida is third with a one over par score of 289, while Texas and sixth ranked Florida State are tied for fourth at 291.   The course was challenging as only 14 of the 94 players scored under par.

Clemson’s team score of 298 is just four shots out of sixth-place and is tied with 30th ranked Ohio State.

Legacy’s round was her best since February 7 when she had a 69 in helping Clemson to its first tournament win in history at the UCF Challenge in Orlando. The junior golfer had four birdies, all over the last 10 holes of her round. It marked the fourth time this year she had the top score of a round for Kelley Hester’s team. Legacy is tied for seventh after the first round.

Alice Hewson, Clemson’s top player for the course of the season with a 71.79 average, played the last five holes in two-under-par to finish with one over par 73 on Friday.   The Clemson sophomore started slowly with three bogeys over her first four holes, but had five birdies over her last 14 to lead the Clemson team on birdies for the day. She is in 18th place after the first round.

Ana Paula Valdes and Marisa Messana had scores of five over par 77. Valdes shot a 37 on the front, then had a 40 on the back as the wind kicked up.   Messana was just two over on the back nine and hopes to have momentum going into Saturday.

Freshman Kennedy Swann, Clemson’s top golfer at the LSU Tiger Classic, played the front nine in even par, then had a 42 on the back when the winds kicked up.

Play on Saturday will begin and 8:00 a.m. with Tulane, Vanderbilt and UNC-Wilmington in the first groups. Clemson beings off the first hole at 9:30 a.m.