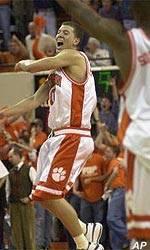 CLEMSON, S.C. – Clemson had not beaten a top-ranked team in 21 years, and coach Larry Shyatt wanted the Tigers to savor the moment in the closing seconds of their 75-65 victory over No. 1 North Carolina.

“Why not enjoy it for 30 or 60 seconds,” said Shyatt, who said his players had spent the past few days angry at themselves for their recent poor play.

The Tigers’ only other win over a top-ranked team was an 87-82 overtime triumph against Duke at Littlejohn Coliseum on Jan. 9, 1980.

Clemson’s chance for an upset appeared dim when Will Solomon was called for his fourth foul with 12:56 left. Clemson was leading 47-45, but Solomon had been responsible of 13 of the previous 17 Tigers’ points.

No need to worry. Solomon’s teammates responded with a 12-4 run as the Tigers ended the Tar Heels’ 18-game winning streak.

Solomon, the Atlantic Coast Conference’s leading scorer, said he heard the crowd moan when he sat down, but knew they were wrong.

“Any of these guys can play with anybody in the ACC,” he said. “I wasn’t worried.”

Tigers coach Larry Shyatt said the freshman Stockman, who started in place of Solomon after the junior missed some classes last week, shared his confidence with the rest of his young team, which started three freshmen and two sophomores Sunday.

Edward Scott of Clemson then hit four free throws in the last minute and the Tigers held on as North Carolina missed several 3-point attempts.

The victory ended an eight-game losing streak for Clemson, which was coming off its worst loss in 45 years, 85-51 at North Carolina State Wednesday.

Brendan Haywood, Joseph Forte and Jason Capel led the Tar Heels with 16 points each. The Tar Heels were coming off an eight-day layoff and looked rusty, shooting 39 percent.

The game featured a showdown between the ACC’s top two scorers. Coming into Sunday’s game, Solomon was averaging 21.3 points a game, one-tenth of a point better than Forte. But the Tar Heels’ guard struggled for most of the game, hitting his first field goal with 14:10 left in the game. He finished 6-for-19.

“I got my rhythm, but it just wasn’t enough,” Forte said.

Trailing 35-30 at half, Solomon scored 13 of Clemson’s first 17 points in the second half, giving the Tigers their two-point lead.

North Carolina coach Matt Doherty praised Solomon, who went 6-of-13 in the second half, including three 3-pointers.

“Solomon was able to get it going in the second half and he is tough to stop when he gets hot,” said Doherty, who before Sunday had never lost to Clemson as a player (10-0) or coach (1-0) at North Carolina.

With Solomon on the bench, the Tigers then went on a 12-4 run to lead 59-49. Thomas Nagys had a 3 and a driving jumper to start the burst, and Stockman, who finished with 16 points, ended the run with a 3-pointer.

Shyatt said he ordered his team to keep attacking.

“I thought that’s how we got there,” he said. “I didn’t think we could beat a team this smart any other way.”

Solomon came back in after Haywood’s dunk, and the Tar Heels went on a 6-0 run in the next 2:15, cutting the lead to 61-60. But Haywood got a technical for hanging on the rim and Solomon hit a free throw to end the spree.

North Carolina struggled from outside, shooting 1-for-14 from 3-point range in the second half after going 5-for-16 in the first half.

Clemson has now beaten a ranked team every season since 1987.