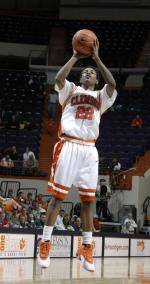 Shawan Robinson shot 5-for-6 from 3-point range and scored a career-high 24 points, leading Clemson to an 81-72 win over North Carolina on Saturday.

Clemson knocked down the open shots created when the Tar Heels (13-5, 3-4) gambled for turnovers by trapping on the perimeter.

“Sooner or later you are going to have a night like that. It was just the best night in Clemson basketball,” said first-year Clemson coach Oliver Purnell, laughing as he savored his first ACC upset.

The victory was the biggest since the Tigers defeated then-No. 1 North Carolina 75-65 in February 2001.

The Tar Heels have yet to win a conference road game this season.

“We are the remedy for most people’s woes,” North Carolina coach Roy Williams said.

As soon as the 3s started falling, Robinson said he knew that things were finally going to fall into place for Clemson, which was averaging an ACC-worst 58.6 points in league play.

“You just can’t wait to get the open look,” Robinson said.

There were plenty of open shots early, as North Carolina gambled the Tigers would keep missing. By the time the Tar Heels clamped down, Clemson had gained too much confidence to start missing, Babalola said.

“When they started to fall, I knew God was looking out for us today,” Babalola said.

Credit Clemson’s defense, which held North Carolina scoreless for an eight-minute stretch in the first half, forced 14 turnovers and holding the Tar Heels to 6-of-19 shooting from 3-point range.

“That’s been our rock and our anchor. That’s who we are,” Purnell said.

The Tar Heels cut the lead to 54-47 with less than 14 minutes to go before the Tigers hit four 3-pointers to take a 66-52 lead. North Carolina would not get closer than eight the rest of the way – even though Clemson didn’t hit a field goal in the final 4:40.

Sean May, who ranks in the top five in the ACC in scoring and rebounding, was held to just eight points and three rebounds, mostly by Chapel Hill, N.C., native Chris Hobbs.

Hobbs stats – he scored just three points and had eight rebounds – weren’t impressive, but his effort was key to the win, Purnell said.

“I thought we were going to have to double-down on May early, but Hobbs kind of waved us off and stopped him a couple of times in there,” Purnell said. “If you can neutralize a guy like that, that is huge.”

The Tar Heels need to regroup. They play No. 1 Duke on Thursday.

The scheduled doesn’t get any easier for Clemson, which faces top-ranked Duke on Feb. 8.

“It’s not how you start, but how you finish,” Purnell said. “I believe this can be a springboard for us playing better.”