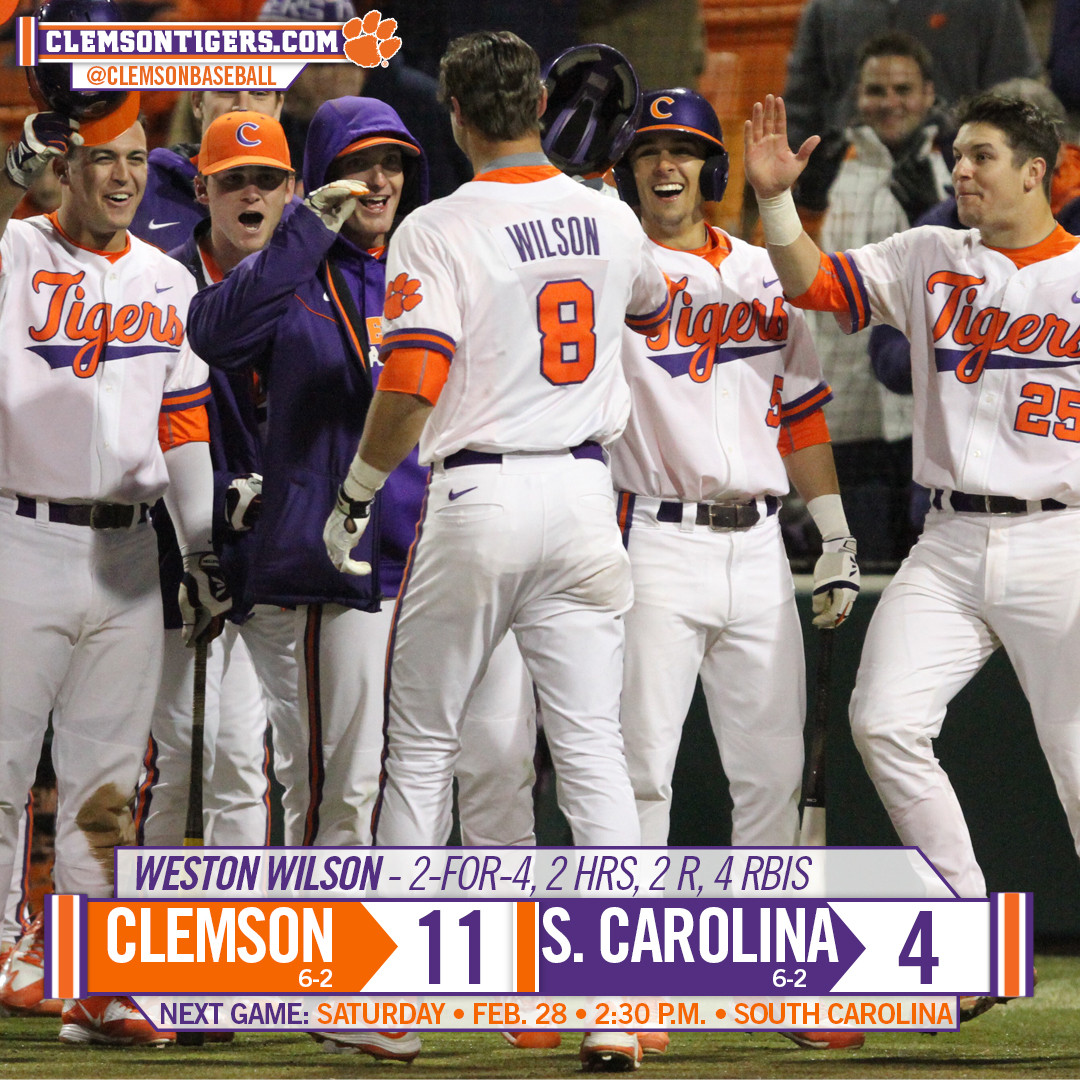 CLEMSON, S.C. – Behind four runs in both the first and third innings, Clemson defeated No. 10 South Carolina 11-4 in front of 6,272 fans at Doug Kingsmore Stadium on Friday night. The Tigers, who took a 1-0 lead in the series, won their fifth game in a row and improved to 6-2 on the season. The Gamecocks fell to 6-2, as their six-game winning streak came to an end.

The Tigers scored four runs in the first inning and never relinquished the lead. Chase Pinder’s two-out, two-run triple highlighted the uprising. Clemson doubled the lead with four runs in the third inning on a three-run homer by Chris Okey and a solo home run by Weston Wilson. It marked the first time Clemson hit back-to-back long balls since 2010. The Gamecocks rallied with three runs in the fourth inning and one run in the fifth, but Wilson belted his second homer, a three-run shot, in the seventh inning to give Clemson an 11-4 lead.

“I thought we played really well tonight,” said Head Coach Jack Leggett. “We had a great approach going into the game and had really good focus. I could tell when the kids showed up today they had a purpose in mind and they were well prepared. We got some punches in early, which was big. We scored four in the first inning and in the third as well.”

Tyler Krieger, who extended his hitting streak to 10 games dating to 2014, led the Tigers’ 12-hit attack by going 3-for-4 with one RBI and three runs. Okey and Wilson both went 2-for-4 with four RBIs and two runs.

The series continues Saturday at 2:30 p.m. at Fluor Field in Greenville, S.C. Live streaming is available at GreenvilleDrive.com. Fan Fest, which opens Saturday at 10 a.m., is on Field Street outside of Fluor Field. Food, drinks, family-friendly activities and all things Clemson can be found at Fan Fest. The team bus arrives on Field Street near the stage and ticket booth at approximately 11:15 a.m., followed by a Tiger Walk into the stadium.