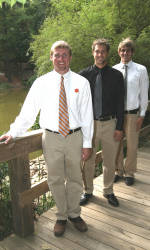 ATLANTA – The Clemson men’s swimming and diving team laid everything on the line in a season-ending sixth-place finish at the ACC Championships. For eleven athletes, it was likely their last collegiate competition, and they rewrote the Clemson record book. The Tigers saw four new school records posted and 21 top-ten all-time swims. When the water settled, the Tigers were left in sixth place, garnering 346 points.

David Gordon got the night started placing ninth in the 1650 free in 15:31.61, seventh best in Clemson history. His split in the 1000 free, a 9:20.96, was also good for fourth in Clemson history. Tom Recko continued his solid performance, taking fifth in the 200 (1:45.97) back and senior Taylor Thompson taking 11th with important points for Clemson.

The Tigers were able to make up a lot of ground on the field in the 100 free, as Adam Farnham led three Clemson swimmers in the Finals heat. Farnham picked up the bronze, notching a 44.01, second-best in Clemson history. Russell and Vahle were able to pick up 7th and 8th in the event. Senior David Gordon and junior Dan Mengering tied for 12th in the 200 fly clocking in at 1:49.49.

Several of the Tigers will wait to find out if their times will get them into NCAA competition in March. Many of the athletes will also stay in Atlanta to take part in the Long Course Championships and attempt to make their Olympic Trial cuts.