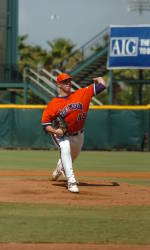 Stan Widmann made his first-ever appearance off the bench a memorable one, as his eighth-inning sacrifice fly scored the go-ahead run in Clemson’s 6-2 victory over Maryland in front of 347 fans at Shipley Field on Sunday. The Tigers, who won the series 2-1, improved to 18-8 overall and 6-6 in the ACC, while the Terrapins fell to 14-13 overall, 3-9 in ACC play.

Widmann, the Tigers’ fourth-year junior shortstop who entered the day with 163 career starts, had never come off the bench. The Hurst, TX native was not in the starting lineup due to an injury, but as a pinch-hitter in the eighth inning, he lined the first pitch he saw to right field to score Ben Paulsen before the Tigers added three insurance runs in the ninth inning.

The Tigers took a 2-0 lead in the first inning thanks to three hits, including two doubles. Mike Freeman led off with a single to center and moved to third on Jeff Schaus’ double to left-center. Doug Hogan’s groundout to shortstop plated Freeman and advanced Schaus to third. Paulsen followed with a double to center to score Schaus.

In the bottom of the fourth inning, the Terrapins tallied four straight hits and two runs to tie the score. Gerry Spessard hit a one-out single up the middle and advanced to third on Chad Durakis’ double to left field. Then on an 0-2 pitch, Will Greenberg laced a single to left field to score Spessard and move Durakis to third base. Durakis then scored when Hogan’s attempt to pick off Durakis was dropped by third-baseman John Hinson, as the ball got far enough away for the Terrapin catcher to score.

In the top of the eighth inning, Paulsen led off with his second double of the game, this time down the left-field line. After Kyle Parker walked, Wilson Boyd’s groundout to first moved the runners up a base. Widmann then lined a sacrifice fly to right-center, as A.J. Casario made a tremendous diving catch to rob Widmann of a hit. However, Paulsen scored on the play to give Clemson the lead.

In the ninth inning, the Tigers added to their lead with three runs. Alex Lee led off with a triple to left-center on a ball that caromed off centerfielder Nick Jowers on his diving attempt. Freeman followed with a double to left-center to score Lee and Schaus reached on a bunt single. Lee, Freeman, and Schaus, all lefthanded batters, registered hits against lefthander Brett Tidball.

After Schaus stole second base, Hogan laced a 1-2 pitch up the middle past the drawn-in infield to score Freeman and Schaus.

In the three-game series, Tiger pitchers combined for a 1.38 ERA and .189 opponent’s batting average.

Clemson will travel to Athens, GA to take on Georgia on Tuesday at 7:00 PM.