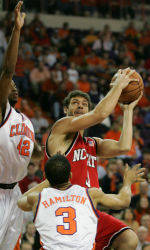 CLEMSON, S.C. (AP) – Ilian Evtimov scored 11 of his season-high 22 points in the two overtime periods to lead No. 15 North Carolina State to a 94-85 victory over Clemson on Sunday.

The Wolfpack (16-4, 5-2 Atlantic Coast Conference) were on the verge of following an embarrassing 83-65 home loss to Seton Hall this past Wednesday with another defeat when Cliff Hammonds stepped to the foul line with the Tigers ahead 71-69 with 9.9 seconds to go.

But Hammonds went only 1-of-2, and North Carolina State took advantage with Cameron Bennerman hitting a 3-pointer from the right side to tie things at 72-all with 2.4 seconds left in regulation.

Then Evtimov took over. He started the first overtime with two foul shots and had a bucket to put the Wolfpack up 77-75. He put things away for good in the second OT period, hitting four straight foul shots. When Bennerman followed with the Wolfpack’s season-high 15th 3-pointer, they were up 86-79 with 2:18 left in the second extra period.

Poor foul shooting cost Clemson (14-6, 3-4) again this season. Earlier this season, the Tigers were 6-of-21 from the foul line in a 10-point loss to Duke. Besides Hammonds’ chance to put North Carolina State away at the end of regulation, Sam Perry could have extended Clemson’s 79-78 lead with two foul shots at the end of the first overtime. Instead, Perry missed both and that allowed North Carolina State to force a second OT on Cedric Simmons’ free throw.

Clemson was only 21 of 37 on foul shots, including 7 of 12 in the two overtimes. The Tigers were 14 of 25 from the line in regulation – the same as North Carolina State was on 3-pointers in the first 40 minutes.

Bennerman and Engin Atsur each had 17 points and each hit four 3-pointers for North Carolina State, whose total surpassed the 14 hit in a win over The Citadel this past November.