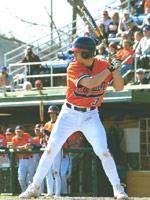 Herman Demmink hit a grand slam and drove in a career-high five runs in Clemson’s 10-1 victory at Duke Thursday night. The win was Clemson’s seventh in a row at Jack Coombs Field, dating back to its last loss in 1998. The Tigers improved to 33-21 overall and 13-9 in the ACC. Duke fell to 23-28 overall, 7-15 in ACC play.

Demmink was 2-for-3 on the evening in his first start at second base since April. He started at third base for an injured Brad McCann in the final two games of the series at Georgia Tech last weekend and missed the previous nine games with a back injury. Tony Sipp and Kris Harvey had two hits apiece as well, as the Tigers totaled 11 hits in all.

Jason Berken allowed one run in 4.0 innings pitched after being relieved by Josh Cribb in the fifth inning. Berken did not allow a walk and departed because he was on a pitch count after coming off an elbow injury. It was his first outing since April 24, when he faced N.C. State. Cribb (4-1) pitched 3.0 innings without allowing a hit, run, or walk while striking out two to earn the win. Duke starter Greg Burke (5-7) allowed eight runs (five earned) in 5.1 innings pitched and suffered the loss.

Clemson took a 1-0 lead in the first inning. Sipp led off the game with a soft single to left and stole second, his 20th stolen base of the season. He also broke an 0-for-13 slump with the hit. He moved to third on Brad McCann struck out looking, Lou Santangelo hit a chopper to John Berger at third, who could not come up with the ball, enabling Sipp to score.

The Tigers took a 2-0 lead in the second inning thanks to something they had not seen much of on the road in the ACC. In over nine ACC road games this year, Clemson was 8-for-73 (.110) with runners in scoring position. But Demmink helped reverse that stat with a run-scoring single to right-center. Andy D’Alessio, who scored on the play, had led off with a walk and advanced to second on Tyler Colvin’s groundout to the shortstop on a hit-and-run.

Javier Socorro, the ACC’s second-leading hitter, smacked a triple to left-center to start the fourth inning. But Berken got Adam Murray to ground to D’Alessio at first. Socorro broke on contact, and was tagged out at the plate by Lou Santangelo. After Murray advanced to second on a wild pitch, he scored when Tim Layden hit a ground ball that D’Alessio could not come up with. Layden was thrown out at third on the play, preventing further damage.

Clemson responded with two runs in the fifth inning. Sipp led off with a ground-rule double to left-center and went to third on Storrer’s line-drive single to left-center. Then, after being down 0-2 in the count and battling back to a 3-2 count, McCann fisted a single to left field to score Sipp. Storrer also scored when Socorro’s throw from left field was errant. Clemson was unable to bring McCann home from third with no outs. Santangelo and Harvey both grounded out, and McCann was out at the plate attempting to score on a wild pitch.

The Tigers came right back with four runs in the sixth inning. D’Alessio reached on a fielding error by Layden and advanced to second on Colvin’s walk. Triplett then laid down a bunt single to load the bases with no outs. Demmink, who was 3-for-5 with five RBIs with the bases loaded this year entering his at-bat, golfed a 1-2 curveball over the fence in right field for a grand slam. It was the #9 hitter’s first career grand slam and the team’s fifth grand slam of 2004. It was also Demmink’s fourth homer of the season.

Clemson upped its lead to 10-1 in the seventh inning. Harvey laced a single to center and scored on Colvin’s line-drive home run to right field, his second of the season.

The two teams will matchup in game two of the series Friday at 2:00 PM. The game was originally scheduled for a 5:00 PM start, but the start time was changed to 2:00 PM.