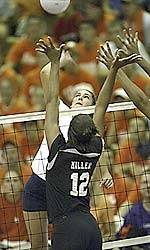 CLEMSON, S.C. – The Clemson volleyball team took a four-game thriller from in-state rival South Carolina on Tuesday night at Jervey Gym in front of a record crowd of 1,467. The Tigers won the first two games 33-31 and 30-26, then the Gamecocks claimed game three 30-22 before Clemson stormed back to win the final game by a score of 30-26. Clemson defeated the Gamecocks for the first time since 1999, and for the fifth time under head coach Jolene Jordan Hoover. With the win, Clemson improves to 3-5 on the season while South Carolina falls to 2-4.

“This was not just a win for us – it was a win against a great team,” said Jolene Jordan Hoover. “South Carolina is a big, athletic team with a lot of offense. Winning the first game was critical for us and set the tone for the whole match.”

South Carolina appeared to be in control of game one, jumping out to a five-point lead at 6-1, then building that to seven points (12-5). Clemson closed the gap to four at 13-17, then won four straight points to even the score. The Gamecocks responded to the Tigers’ challenge, rattling off six consecutive points to gain another six point advantage. At 21-26, it was Clemson’s turn to put together a streak, claiming six points of its own to take their second lead of the game at 27-26. The lead changed hands several more times with South Carolina serving for the game twice before a block by Ryane Beasley and Liz Beckham then a kill by Leslie Finn sealed the game for the Tigers.

In game two, Clemson won 10 of the first 15 points to gain a sizeable lead. South Carolina nibbled at the Tigers’ lead, narrowing it to three points at 13-16, then winning four of the next five points to knot the score at 17 each. Clemson responded again, taking another five-point lead at 25-20. The Tigers held on to their advantage for the remainder of the game, closing it out off consecutive kills by Beasley and Finn.

Game three was dominated by the Gamecocks, as South Carolina took an early seven-point lead (10-3), and held onto that margin until Clemson closed to within six late in the stanza. The Gamecocks won five of the last seven points behind three kills from Sarah Morgan to take the game.

The fourth game was even early, as the teams traded leads until Clemson went up 11-7 off two aces and three kills. The Tigers built their lead to six at 22-16, before the Gamecocks ran off six consecutive points behind two kills and a block from Sarah Morgan. The score was tied at 24, 25 and 26 each, then Clemson won the last five points behind two kills each from Stephanie Haskell and Lori Ashton, and one kill from Ryane Beasley.

South Carolina’s Sarah Morgan tallied a match-best 19 kills, while Lynae Vanden Hull added 13 kills and a .414 hitting percentage. Nicole Miller recorded a double-double with 10 kills and 16 digs, and Katelyn Panzau passed out 56 assists with 12 digs and three aces. Niece Curry had a team-best five blocks (one solo) and three service aces with nine kills. As a team, the Gamecocks hit .249 with nine team blocks.