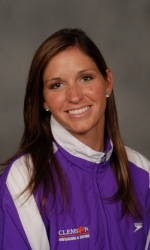 The men saw several swimmers score throughout the evening, starting with first and third place in the 200 medley relay. Sophomore Matt Angelini then went on to win the 1000 free in 9:34.23. Then, in the 200 free, Adam Farnham, Matt Balderston, David Gordon, and Sean Geary finished in the top four spots. Senior Stephen Russell, coming of a stellar meet against UNC, won the 50 free in 21.06 seconds. Trey Charlton and Kyle Shoemaker were close behind to take fourth and fifth.

In the 200 IM, the Tigers got a boost from Jay Crout, Tom Recko, and Eric Lane who finished one-two-four respectively. Dan Mengering then came up with a win in the 100 fly, with Shoemaker taking third. Andy Bergren won the 100 free and Attila Ruszka took second to Davidson’s Scott Frantz Jr. in the 100 back. Then, Geary, Recko, and Angelini combined to sweep the 500 free. Crout, Angelini, and Shoemaker finished one, two, four in the 100 breast, before concluding the evening with a sweep in the 200 free relay.

The women built some momentum early as they swept the 200 medley relay to start the meet. Summer O’Donnell won the 1000 free, with Mandy Snell taking third. Junior Rachel Regone took the 200 free, followed closely by fellow Tigers Cassy LaRussa and Sarah Smith. O’Donnell won her second event of the night in the 200 IM.

Agata Nowak, Jen Grove, and Elle LeClair gave the Tigers a lift with solid finishes in the 100 fly. Crina Aeschbacher and Rachel Hesler took second and third in the 100 free. Junior Ashley Clay took the 100 back win, with Alex Allen taking third. Michelle Parkhurst and Katrina Obas were the top two in the 500 free.

The Divers had a strong showing on the evening as well Senior Danielle Kazilionis won both the one and three-meter events. Stephanie Fura took second in both events as well. For the men, David Giambra and Marco Ray split, with Giambra taking the 1-meter and Ray winning the 3-meter event with a 295.65.

The Tigers will continue their busy week on Saturday with an 11 a.m. meet at NC State.