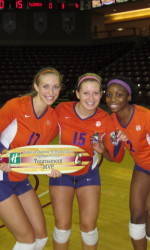 CHARLESTON, SC – Clemson took an exciting five-set match over host school College of Charleston on Saturday to close action at 3-0 for the weekend. The Tigers (7-3) also defeated South Carolina, 3-0, on Friday, and Winthrop, 3-1, on Saturday, in claiming the College of Charleston Invitational. Junior Alexa Rand was named Tournament MVP, while Sandra Adeleye and Hannah Brenner were named to the All-Tournament team.

Rand had 36 kills in the weekend, including a career-high 18 against the Cougars on Saturday to lead all players. She hit .500for the weekend, with just three errors. She also led the Tigers with 11 blocks, and added two aces for good measure.

Brenner led the Tigers with 81 assists, and set up a kill on 45.3 percent of her sets, and also added a key ace late in the fifth set to set up match point for the Tigers. She also had double-doubles in each match Saturday, accumulating a total of 34 digs to lead the Tigers.

Adeleye led Clemson in kills with 38 and hit .437, while also adding ten blocks, seven of which came on Saturday night. She had kill totals of 13, 13, and 12 in the three matches overall.

Serenat Yaz also played solid ball for the Tigers, who claimed the state tournament for the second straight year, without dropping a match. Yaz had 32 kills five aces, six blocks, and 28 digs, and freshman Kristin Faust had 20 kills and 29 digs.

Clemson played from behind most of the night, as the Cougars ran out to a 17-7 lead quickly in the first set. Clemson made a run to pull within six, but didn’t get any closer as the Cougars won, 25-15.

The Tigers came out with an edge in the second set running off nine straight points on Cansu Ozdemir’s serve to take a 9-1 lead. The Tigers took advantage of 12 Cougar attack errors in tying the match at 1-1 going into the intermission.

It was again up to Clemson to force the match longer, and they did so quickly, taking a 16-8 lead after a Kristin Faust kill. Clemson extended the lead to 20-10, and the teams traded points the rest of the set, with Clemson taking a 25-15 win.

The fifth set was very intense, as College of Charleston took a 6-3 lead early after a pair of Elyse Chubb kills. Clemson fought back to tie the match at eight-all on a block from Simmons and Adeleye. The Cougars looked to pull away, taking an 11-9 lead, but a Hoover timeout sent the Tigers on a 7-2 run to close the match. Hannah Brenner had an ace at 13-13, and forced an overpass on her next serve, which Rand picked off the clinch the match.