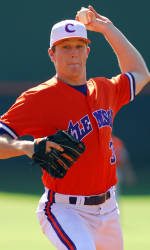 With no outs, the tying run on third base, and winning run on second base in the bottom of the ninth inning, Casey Harman and Matt Vaughn retired three straight batters without allowing a run to preserve Clemson’s 2-1 win over Maryland in front of 368 fans at Shipley Field on Friday. The Tigers, who took a 1-0 series lead, improved to 17-7 overall and 5-5 in ACC play, while the Terrapins fell to 13-12 overall, 2-8 in the ACC.

The Tigers got another outstanding starting pitching performance, this time from D.J. Mitchell (3-2). The junior righthander allowed five singles, including three infield singles, one unearned run, and three walks with six strikeouts to earn the win. Harman retired both batters he faced in a crucial situation, while Vaughn picked up his eighth save of the year by retiring the last batter.

The Tigers jumped out to a 1-0 lead in the first inning. Mike Freeman reached on a one-out, infield single to second base and advanced to second on Doug Hogan’s groundout. Ben Paulsen then lined a single to right field. Freeman rounded third base and just beat the throw in a close play at the plate.

Thanks to a Terrapin miscue, the Tigers upped their lead to 2-0 in the sixth inning. Hogan reached base and advanced to second with one out when rightfielder Bill Rice dropped a routine flyball. Three batters later, Kyle Parker laced a two-out single to center to score Hogan.

In the bottom of the ninth inning, Chad Durakis led off with a walk on four pitches. Gerry Spessard followed with a single through the right side, advancing pinch-runner A.J. Casario to second. Nick Jowers then laid down a bunt on the left side of the infield. Mitchell attempted to pick up the ball with his barehand, but he could not do so cleanly. Even though Jowers would have been safe at first, Mitchell threw to first wildly, as the ball went into foul territory. Casario scored on the play, Spessard went to third, and Jowers advanced to second.

With the Terrapins poised to pull off the comeback win, the Tigers refused to give in. Will Greenberg grounded out for out #1 off Harman, while the runners stayed at second and third. Harman then struck out Joe Palumbo for out #2. After Vaughn entered the game, he got Steve Braun to ground out to first base. Paulsen flipped the ball to Vaughn, who stepped on first for the game-ending out.

Freeman went 3-for-4 to lead the Tigers, who outhit Maryland 8-5 on a night when many well-hit balls to left field were caught due to heavy winds blowing from left to right. Braun paced Maryland with two hits in five at-bats.

Clemson and Maryland will play game-two of the three-game series on Saturday at 4:00 PM.