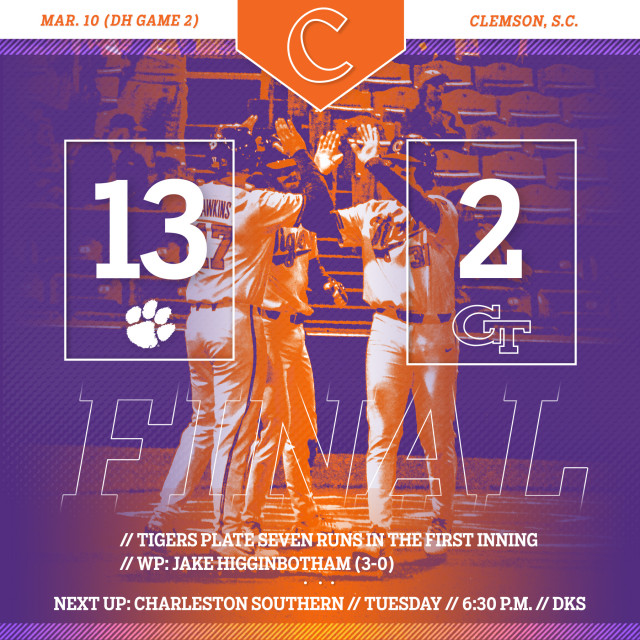 CLEMSON, S.C. – No. 6 Clemson scored seven runs in the first inning and cruised to a 13-2 victory over Georgia Tech in the second game of a doubleheader at Doug Kingsmore Stadium on Saturday night. The Tigers, who swept the series 3-0 and won their seventh game in a row, improved to 15-1 overall and 3-0 in the ACC. The Yellow Jackets fell to 9-6 overall and 0-3 in ACC play.

The Tigers scored seven runs on three hits, three walks and a hit-by-pitch in the first inning, keyed by Grayson Byrd’s two-out, two-run single. Two batters later, Logan Davidson ripped a three-run double. Seth Beer hit a two-run homer in the third inning, his sixth long ball of the season, then Chris Williams led off the fourth inning with a homer, his fourth home run of the year. Bryce Teodosio added a leadoff home run in the seventh inning, his third homer of the season.

The Tigers host Charleston Southern on Tuesday at 6:30 p.m., on ACC Network Extra. Tickets are only $2.