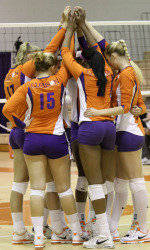 ATLANTA, GA – The Clemson volleyball team boosted their NCAA Tournament resume with a 3-0 (25-22, 26-24, 25-19) road win in Atlanta on Wednesday night over the Yellow Jackets. Clemson closes the regular season with a 20-11 overall mark and a 12-8 ledger in ACC play. The Tigers wrapped up the fifth spot in the conference, two spots above their predicted order of finish.

All-ACC middle hitter Sandra Adeleye led all players with 15 kills and a .435 hitting percentage. The story of Clemson’s day was defense, as Clemson held the Jackets to .164 hitting, and held All-ACC hitter Monique Mead to a -.026 night hitting with 11 errors to go with her ten kills. She entered the match second in the nation at more than five kills per set.

The Tigers had 10.0 blocks and Natalie Patzin led all players with 14 digs, while Mo Simmons had 13 in front of her hometown crowd. Simmons delighted the group by clinching the match with a kill off the block.

In the first set, Clemson ran out of the gates to take a 7-1 lead, and would never give up the lead in the set. Tech was able to close to one at 18-17, but Clemson halted the run with four straight, including kills from Adeleye, Brenner, and Rand, and an ace from Patzin. The Jackets continued to ride Mead, who connected on three kills, but was long on another two, clinching the set for Clemson, 25-22. Adeleye had seven kills to lead all players, while Patzin’s seven digs were a match high.

The second set looked to be all Clemson before a couple of unexpected runs tilted the match in Clemson’s favor. The Jackets went on a 7-1 run to turn a 17-13 deficit into a 20-18 lead. With the score knotted at 20-20, they reeled off four of the next five to set up set point, 24-21. But Clemson was up to the challenge, siding out by a kill from Yaz, before Simmons and Rand combined for a block. Jennifer Percy then hit one wide, forcing a Tech timeout with a 24-23 lead, needing just a sideout to win.

Yaz responded with an ace in the middle of the floor. The Tigers then got the next point before it was wiped off the board due to offsetting violations. Yaz stepped up and hit a hard liner on her serve right at the libero, who mishandled the ball, clinching the 26-24 win for Clemson.

The third set was all Tigers from the get-go, as Clemson raced out to a 7-0 lead behind three blocks from Alexa Rand. Clemson stretched the lead to 15-3, prompting Georgia Tech’s second timeout of the set, but the Jackets had too far to climb back. Georgia Tech actually outscored the Tigers 16-10 the rest of the way, but the early deficit was too much to overcome, as Clemson survived for the 25-19 win, after Tech had closed to within five at 23-18.

Clemson will gather on Nov. 27 for the NCAA Selection show, which appears on ESPNU at 6:00 pm.