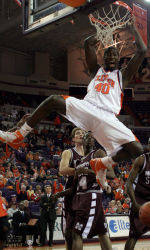 CLEMSON, S.C. (AP) – James Mays had 17 points and 12 rebounds and Clemson opened 6-0 for the second straight season with a 69-66 victory over Mississippi State on Tuesday night.

Mays had 12 of his points in the second half, including the two foul shots with 5:04 to go that put the Tigers ahead for good.

The Bulldogs (2-2), who lost their second straight, came within 68-66 with 9.6 seconds left on Charles Rhodes’ inside bucket. Vernon Hamilton made one of two foul shots with 4.2 seconds remaining to give Mississippi State one final shot at a tie. But Jamont Gordon’s long 3-pointer was off the mark.

Rhodes topped the Bulldogs with 20 points, all in the second half. Rhodes’ play — he was 8 of 9 from the floor after the break — kept Mississippi State in this one. He had a high-flying jam and a foul shot before Barry Stewart’s three put the Bulldogs up 55-53.

Hammonds tied the game with a jumper, and Mays followed Trevor Booker’s miss to give Clemson the lead. Rhodes had a jam to tie things for the last time before Mays’ foul shots.

Gordon, Mississippi State’s leading scorer coming in, was held to 9 points, almost 7 fewer than his average. He added 11 rebounds and three blocks.

The Tigers led 35-30 with 31.5 second left in the opening half, when two mistakes by Mays tightened the game. First, Mays threw an inbound pass from beneath Mississippi State’s basket the length of the court and out of bounds. Then, with the Bulldogs scrambling for a shot, Mays fouled Gordon as he attempted a 3-pointer. Gordon made all three foul shots to make it a 35-33 game at the break.

The teams had only met once before with Clemson winning, 59-32, at the 1981 Christmas Kettle Classic in Houston.