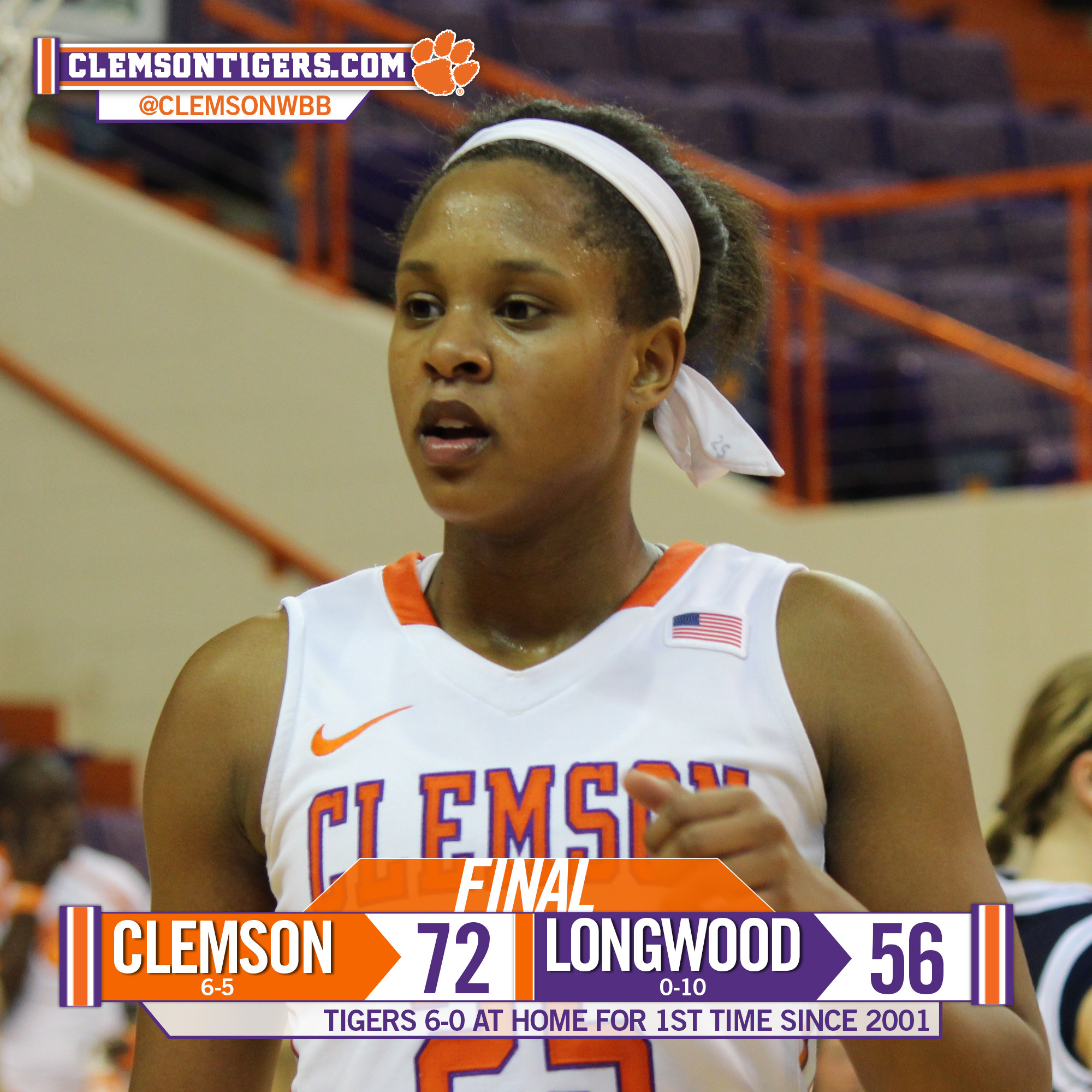 CLEMSON, S.C. – The women’s basketball team has started 6-0 at Littlejohn Coliseum for the first time since 2001 with its 72-56 win over Longwood on Friday. It was the third straight win for Clemson (6-5) overall, while the Lancers fall to 0-10 on the year. The Tigers have a chance to make it seven in a row at home when SC State comes to town on Sunday at 2 p.m.

Clemson used a 15-0 second half run that spanned six minutes to put Longwood out of reach, with four different Tigers hitting layups on the run.

Nikki Dixon had a monster night, finishing with team-highs in points (24) rebounds (7), steals (6) and assists (4). Dixon went 8-12 from the field and went 8-10 from the free throw line in eclipsing the 1300 point plateau for her career. She also recorded the 200th steal of her career. Dixon’s 24-point performance makes it the 19th time in her career she’s scored 20 points or more in a game.

Daneesha Provo scored in double-figures for the second straight game, finishing with 11 points, while Cha’nelle Perry also provided a spark for the Tigers, scoring 10 points on 5-10 shooting.

Clemson controlled play down low, scoring 38 points in the paint on the night. The Tigers had plenty of help from the reserves, finishing with 26 bench points.

On the defensive end, the Tigers finished with eight blocks, tied for the most in a game this season. They also forced 17 turnovers and came up with 11 steals. Clemson held Longwood to only four fast break points and had a season low ten turnovers.

Clinging to a three-point lead, 36-33, with 17:40 to play, Clemson ramped up the defensive pressure and began to string together easy buckets. Dixon scored seven points during a 15-0 run, while Provo added four, and the entire run came on layups, with a n and-one by Perry thrown in the mix.

The Tigers can match the 2001-02 team’s 7-0 home start with a win Sunday. Family packs of four tickets are available for $10, which includes the chance to meet Santa at halftime. Clemson is 14-4 all-time against SC State.

On being 6-0 at Littlejohn:

“We have to get wins at home because it’s so hard to get wins on the road. It’s always good to get these wins at home. There’s always a great comfortability playing in Littlejohn. We have a great group of fans here that are very supportive of our players and support us through the good and the bad.”

“When she (Dixon) is in the game, she gets in a zone and does very well at getting to the basket. She did a good job from the free throw line and following the gameplan and creating off the dribble. She was active defensively and on the boards. I’m proud of Nikki and what she’s given us from her minutes and contribution standpoint.”

At the Buzzer: Kelly Gramlich’s Take

Led by Senior Nikki Dixon, Clemson went on a 17-6 run in the first 8 minutes of the second and half and never looked back. Dixon dominated the game throughout, leading the Lady Tigers in points (24), rebounds (7), assists (4) and steals (6). Clemson’s offense was also fueled by double digit scoring efforts from freshman guard Daneesha Provo and freshman forward Cha’Nelle Perry.

The Lady Tigers took care of the ball, committing a season low ten turnovers in the contest. Clemson really limited Longwood offensively, holding the Lancers to 56 points and only four fast break points. The key to the Lady Tiger’s 6th victory of the season was Coach Audra Smith opting to play a smaller five guard lineup for a majority of the game, as the Lancers could not handle Clemson’s speed and athleticism on the perimeter.