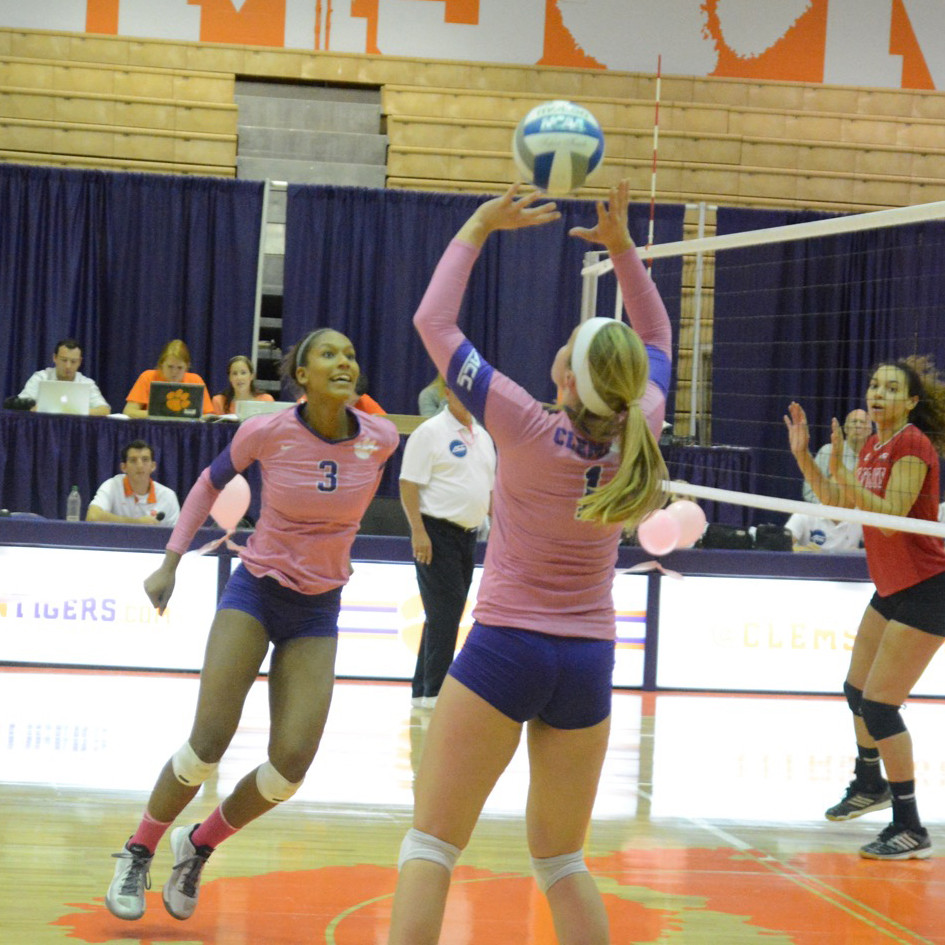 CLEMSON, S.C. – In a match that featured 19 tie scores, NC State was able to pull off the three-set victory over Clemson (21-25, 22-25, 20-25). Taylor Daniel turned in the best all-around match of her collegiate career in her first start in Jervey Gym.

“The energy was good and I thought they stayed connected throughout the match,” said head coach Hugh Hernesman. “That’s tough to do when you have new faces on the floor and that’s hard to do when you lose a set or you go down 2-0. Sometimes you lose that energy and we didn’t, I thought we competed great.”

Despite falling to the Wolfpack in three, Clemson was able to force pivotal moments late in each set that posed threats to NC State. In the first, Clemson was able to pull within two (20-22), forcing an NC State timeout. The Tigers did it again in the second, coming back to force a timeout with a 22-24 score. Clemson made one final push late in the third as well to tie the match at 20, but the Wolfpack was able to win the next five points to earn the victory.

“They’re a good serving team, I thought we did a good job of avoiding big runs and that’s what can happen with good serving teams. There were a couple in there and I think that was the difference in three pretty close sets.”

Daniel connected with Tigers for 22 assists to go along with her three kills on seven errorless attacks and a service ace. Defensively, the freshman out of Russia, Ohio tallied six digs and two blocks.

“You worry about that first start at home being too big of a moment for some players but I think Taylor played a pretty cool, calm and collected match. She continues to improve. I thought our offense flowed pretty well, she mixed it up really well and she really got our left sides in rhythm.”

Benefitting from Daniel’s sets, Sydney Moseley converted on five of her 14 attacks without registering an error for a team-best .357 hitting percentage. She also added six digs in the match with a block.

Leah Perri led the way with 13 kills, complemented by seven digs and a block. Alex Lynch hit .273 in the middle with four kills on 11 swings and just one error while denying three attacks by the Wolfpack.

“Leah set the tone early and they really feed off of her energy. She came out and she was challenging the block, she wasn’t holding anything back, she wasn’t playing safe and that’s one of the things we talked about in scouting was to be really aggressive. Even though we knew they were a really good blocking team we knew we had to be aggressive and we had to be aggressive high on those hands and she did that.”

NC State avoided Keelie Arneson in the back row but she still managed to tally 10 digs while Kennedy Wilson-Talmadge added five alongside her.

“With such a young group, all of the new faces and our situation right now you just have to look for progress as a group, you have to look for progress in individuals and we’re getting that. So that’s the main focus when you’re in this situation where you’re trying to build a program with so many young players and a lot of injured players so I took a lot of positives from today.”

Next up, the ACC Preseason pick to win the conference comes to Jervey. Clemson will host North Carolina on Sunday at 1:00 p.m.