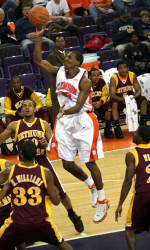 Tigers Show Down With Charleston Southern Saturday at 7:00 PM

Clemson has a 16-0 lifetime record against Charleston Southern.That is the best perfect record for the Tigers against any opponentthey have played over the years. The two teams met last year andClemson came away with an 18-point win. All 16 Clemson wins havebeen by at least double figures. The one game between the two teamsin Charleston was unusual. Clemson won 120-103, the highest scoringregulation game in Clemson history for combined score. The Tigershad a pair of 30-point scorers in the game (Devin Gray and RafieldRagland), one of just two games in Clemson history the Tigers havehad a pair of 30-point scorers. Clemson enters this game with a 3-0record. A victory over Charleston Southern on Saturday would giveClemson its first 4-0 start since 2002-03. Clemson has won each ofits first three games by at least 29 points, a first in Clemsonhistory. Charleston Southern assistant coach J.D. Powell is a 2001Clemson graduate who was a member of Clemson’s 1998-99 team thatadvanced to the Championship Game of the NIT. Charleston SouthernCoach Barclay Radebaugh faced Clemson last year as an assistantcoach at Miami (FL). The Hurricanes defeated the Tigers twice.Oliver Purnell defeated Charleston Southen three times in 1990-91when he was the head coach at Radford. In fact, his victory overCharleston Southern in the Big South Conference Tournament was hisfinal win as Radford head coach. He moved on to Old Dominion thefollowing season. Charleston Southern also enters this gameundefeated. They defeated city rival College of Charleston in theopener, then downed Asbury in the second game of the season. TheBucs made a school record 16 three-point goals against Asbury intheir most recent outing. Clemson has four players averaging indouble figures, but no one with over 12.0 points per game. SamPerry, who averaged just four points a game last year, has beenClemson’s top scorer with the 12.0 average. Perry has made 16 of 24shots from the field to open the season. Clemson forced 31turnovers off 19 steals in the win over South Carolina State.Clemson has had at least 10 steals in every game this year and isaveraging 15.3 per game. Clemson had 30 assists in the victory overCoppin State. That was the most assists by a Clemson team since theTigers had 31 in a win over Youngstown State during the 1988-89season. Clemson has a 66/46 assist/turnover ratio so far thisseason.