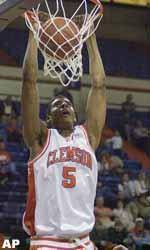 Olu Babalola returned from a two-game suspension with 17 points and eight rebounds for the Tigers (3-1). Cliff Hammonds and Shawan Robinson added 14 points apiece. Robinson also had a game-high eight assists.

Former Clemson standout Tony Stockman led Ohio State (5-2) with 22 points. Stockman, who transferred to the Buckeyes after the 2001-02 season, scored 16 of his 22 points in the first half even though he was booed just about every time he touched the basketball. He finished 4 of 5 from behind the arc.

The Tigers took a different tact, pounding the ball inside to Ford. Clemson outrebounded Ohio State 37-27 and outscored the Buckeyes by 15 points at the free throw line.

Robinson hit two free throws with 36.7 seconds remaining and Clemson went ahead 74-67. The Tigers made 8 of 10 from the line in the final minute.