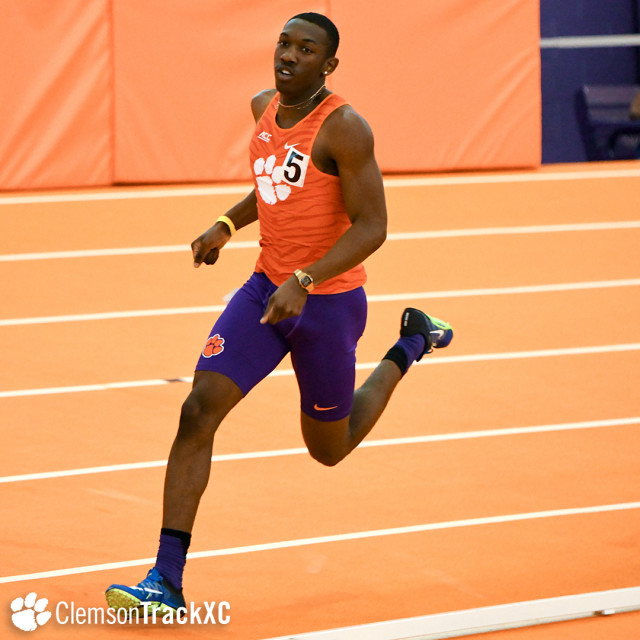 CLEMSON, S.C. – The Clemson men’s and women’s track & field team combined for 10 first-place finishes – five each – in Saturday’s Clemson Opener, which was held at the Tigers’ indoor track & Field facility. The meet was highlighted by senior Jeffrey Green, who shattered the facility record in the 500m with a time of 1:02.53, besting the previous record of 1:03.50 which was set in 2011.

Joining Green with first-place finishes were Cordell Lamb in the 300m, Oliver Lloyd in the 1,000m and James Quattlebaum in the 3,000m. Lamb posted a personal-best 33.28 while Trevious Frazier finished right behind Lamb with a time of 34.08. In the 1,000m, Lloyd ran a personal-best 2:31.27, while Quattlebaum’s time of 8:25.51 proved to be enough to take home the men’s title. Additionally, Clemson’s relay team consisting of Lamb, Darron Coley, Nate Gordon and Malik Epps took home the 4x400m relay title with a time of 3:16.33.

Coley also placed third in the 400m. His time of 48.97 also established a personal record for the Centreville, Va., native.  Gordon, a senior transfer from Georgetown, also placed fourth in his Clemson debut in the 500m, finishing in 1:03.95.

Ishmael Kamara achieved his personal record in the 60m with a time of 6.95, which was good for second place. Junior John Lewis ran his first career mile in 4:06.63 to notch third place in the event.

In the jumps, standout Chris McBride placed second with a best mark of 24-7.25, while Kamara placed third with a leap of 23-4 – his personal best. Freshman D.J. Ledell grabbed fourth place for Clemson with a longest jump of 23-3.5.

Senior Joe Cline achieved a personal best in the men’s weight throw with a distance of 55-0 that was good for second place. Junior Grant Voeks earned a third-place finish in the shot put with a best toss of 50-6.

Sophomore Danielle Little shined for the women’s throws unit, placing second in the weight throw with a personal record of 53-11. Little’s throw bested her previous record by more than six feet and is currently good for eighth in the ACC. Majayla Holland’s toss of 53-9.25 earned her a fourth-place finish in the weight throw.

Freshman Harleigh White placed third in her Clemson debut with a best leap of 17-6 in the long jump.

Up next, the Tigers will host Orange & Purple Classic on Saturday Jan. 6 at the Clemson Indoor Trak & Field Complex.