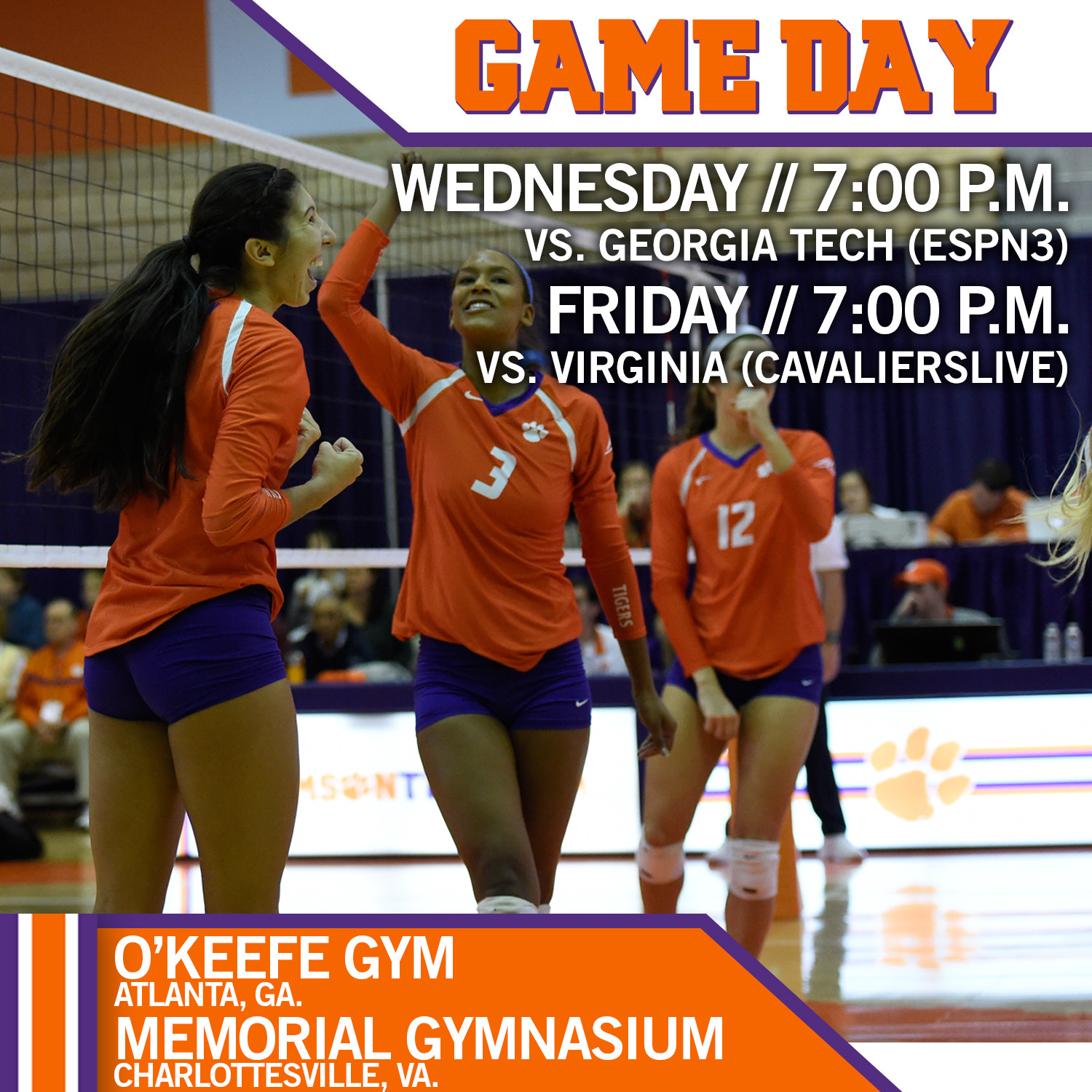 CLEMSON, S.C. – After two close, action packed matches against Wake Forest and Duke last weekend, the Tigers have a short week with a mid-week matchup scheduled for Wednesday night. On November 11, Clemson will head to Atlanta for a 7:00 p.m., rematch with Georgia Tech. The Tigers follow up their match with the Yellow Jackets with a 7:00 p.m., contest with Virginia on Friday night.

Clemson is coming off a tough weekend in which it dropped two highly competitive matches to Wake Forest and Duke this past weekend in Jervey Gym.

Two thriving Tigers head into the two contests eyeing career milestones. Leah Perri is just 12 kills from the 1,000th kill of her career and Keelie Arneson is just 11 digs away from the 10th most ever recorded in NCAA history.

On Friday, Wake Forest jumped out to a 2-0 lead after squeaking out a 33-31 score in the first set and slighting the Tigers, 25-21 in the second. After the break, head coach, Hugh Hernesman’s team came out swinging, taking the third and fourth sets, 25-23 and 25-22 respectively. The Demon Deacons ultimately came out on top by winning the next two points after the Tigers came back to tie the match at 14.

Perri was a force in the match, recording 21 kills, 14 digs and three blocks. She was complemented by efficient efforts from Megan McGinley, Kailey Harvell and Kate Federico.

McGinley strung together a career-best 16 kills on 32 attacks with five errors for a .344 hitting percentage. She also led the Tigers with five blocks in the match. Harvell hit .400 with nine kills, 20 attempts and an error. Federico was at her best tallying 52 assists, three service aces, 14 digs and four blocks to go along with her .400 hitting percentage fueled by seven kills, one error on 15 attempts.

Defensively, Clemson was tough to beat as five players recorded 10 or more digs with Arneson leading the back row with 20. Kennedy Wilson-Talmadge was just one dig off of her career-high with 15 and Sydney Moseley added 10 to her line that included eight kills.

Sunday’s Senior Day was highlighted by senior Alex Lynch’s career best match as she threw down six of her 12 attacks while registering just one error for a .417 hitting percentage. She also led the match with three blocks. Overall, Perri led the offense with her 13 kills and an efficient .314 hitting percentage. Moseley complemented Arneson in the back row again as they each finished with double-figure digs. Moseley finished with 11 digs and eight kills while Arneson dug out 15 balls on her senior day.

Notes (in 140 characters or less)• Clemson’s eight freshmen is the highest total in the Atlantic Coast Conference.• Freshmen have combined for a total of 350 sets. Sophomores, juniors, seniors and graduate students combine for 494.• Hugh Hernesman is the ninth head coach in Clemson volleyball history.• Keelie Arneson’s 15 digs against #17 Florida State broke her into the NCAA’s list of all-time career dig leaders.• Keelie Arneson is the NCAA’s active career digs leader with 2,574 digs. The total ranks her 11th all-time in NCAA history.• Keelie Arneson is just 11 digs from owning the 10th most digs ever recorded in NCAA history.• Keelie Arneson is the 36th Clemson student-athlete to be recognized as one of the NCAA’s career leaders in a statistical category.• If Keelie Arneson duplicates her ‘13 performance (712 digs) she will have the second most digs ever recorded in D-I women’s volleyball.• Keelie Arneson ranks 23rd in NCAA history with a career 5.31 digs per set average.• Keelie Arneson is currently second in the ACC with a 4.90 digs per set average and 441 digs.• Keelie Arneson’s 4.90 digs per set average ranks her 38th in the nation and is the fifth best average in a power five conference.• Leah Perri recorded her 900th career kill against Pittsburgh and is just 12 kills away from her 1,000th.• Leah Perri headlines the Clemson attack with 335 kills in 2015 which is the sixth most in the ACC.• Leah Perri ranks eighth in the conference with a 3.64 kills per set average.• Leah Perri is seventh in the ACC with 376.5 points and is eighth with 4.09 points per set.• Leah Perri has double-digit kills in 19-of-26 matches this season.• Kate Federico ranks eighth in the conference averaging 8.71 assists per set.• Kate Federico ranks 10th in the conference with 688 assists.• Kate Federico has nine double-doubles this season and 12 matches with 30 assists or more.• Kate Federico’s 1,171 assists last year are the second most ever recorded by a Clemson freshman.• Kate Federico’s 1,171 assists in 2014 was the second highest total in the ACC and the most recorded by a freshman.• Kailey Harvell has recorded 10 or more kills in 11 matches this season.• Kailey Harvell is second on the team with 239 kills and a 2.72 kills per set average.• Kailey Harvell hit .484 on the outside (16-1-31) against Miami.• Kailey Harvell is credited with a career best 17 kills, and five aces to go along with eight digs against Syracuse.• Kailey Harvell hit .400 against Wake Forest with nine kills on 20 swings with one error.• Kennedy Wilson-Talmadge recorded her first career match with 10 digs or more, digging 16 balls against Syracuse.• Kennedy Wilson-Talmadge dug out 15 of Wake Forest’s attacks this past Friday.• Kennedy Wilson-Talmadge has 132 digs in 76 sets, which is the most of Clemson’s reserves.• Megan McGinley had a career-best game against Wake Forest with 16 kills, five errors, 32 attacks, a .344 hitting percentage and five blocks.