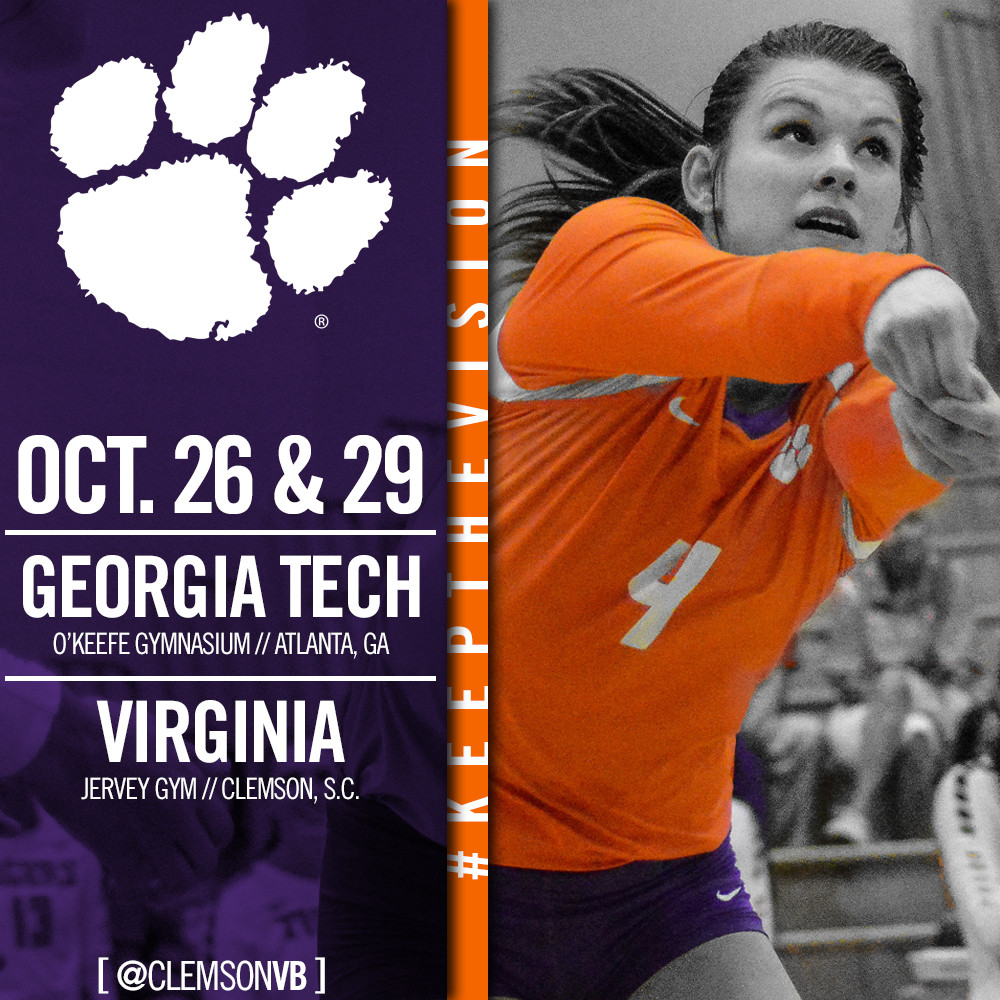 Tigers Set For First Round Of ACC Rematches

CLEMSON, S.C. – This week presents the first two rematches of the season for the Tigers as they will take a second shot at Georgia Tech and Virginia. The Tigers have a quick turnaround this week with a mid-week matchup Wednesday against the Yellow Jackets followed by a contest Saturday night with the Cavaliers.

Clemson’s match with Georgia Tech is slated for 7:00 p.m., on October 26 in O’Keefe Gymnasium. The Tigers will conclude the week hosting the Cavaliers at 6:00 p.m., on October 29 in Jervey Gym. Clemson fell to both teams earlier this season, however, the last time the Tigers faced the Yellow Jackets in Atlanta it was Clemson who came out on top in four sets. It was the first time Clemson had defeated Georgia Tech on the road since 2011.

The Tigers are coming off a tough loss to Wake Forest in which they fell to the Demon Deacons in five sets after taking a 2-0 advantage going into intermission. Clemson hit .348 in the first two sets before Wake Forest made its comeback in the final three sets. Leah Perri tallied her 18th 10-plus kill performance as well as her eighth double-double of the season, however it was Tori Woogk who stole the spotlight. The freshman outside hitter threw down a career-best, 10 kills on 19 swings with just two errors to finish with a .421 hitting percentage. It was her first time recording 10 kills or more in a collegiate match. Over the course of Woogk’s last three matches, the Keller, Texas native is hitting .283 with 21 kills and just six errors on 53 swings.

Fellow freshman, Emily Curtis recorded her second career match with 20 digs or more at libero and now has six-straight matches with 10 digs or more and 10 matches this season with 10-plus digs. In the middle, Jaden Light also continues to develop as she has finished with seven blocks or more in two of her last three matches. Megan McGinley has provided efficient offense out of the middle in the last three matches for Clemson as the sophomore is hitting .395 with 19 kills, two errors and 43 attempts in that span.

Thanks to three aces against Wake Forest, Sydney Moseley now ranks among the best in the ACC along with Perri. The Fountain Inn, South Carolina native currently ranks 10th in the conference averaging .30 aces per set, leading Clemson with 20 on the season. Clemson remains one of the top serving teams in the conference, ranking fourth with a 1.27 aces per set. Its 109 total aces this season is the third highest total in the ACC. Perri assists in fueling that ranking with 20 aces of her own this season and a .23 service aces per set average.