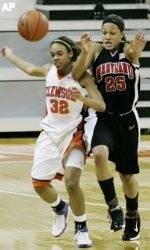 CLEMSON, S.C. (AP) -Maryland’s Crystal Langhorne was so surprised by Kristi Toliver’s perfect 3-point shooting, she had to double check for herself.

“You went 6-for-6?” Langhorne asked her teammate.

Toliver finished with 20 points and the third-ranked Terps continued the best start in school history with a 76-62 victory over Clemson on Thursday night.

The Terps (21-1, 5-1 Atlantic Coast Conference) head into their Sunday night showdown against undefeated and second-ranked North Carolina filled with confidence.

“I just trusted my shot and looked for it,” Toliver said. “But I knew I was feeling pretty good when I made the first back-to-back shots there.”

Toliver became a cherished name in Maryland hoops history last April with her 3-pointer to force overtime in the NCAA tournament finals. The Terps went on to beat Duke for the championship and Toliver’s play is simply called, “The Shot” in the land of the turtle.

She was perfect on five 3-point attempts in the first half as the Terps built a 23-point lead.

Maryland was still comfortably ahead 68-46 with 6:42 to go when Clemson threw a little scare into the national champs with a 13-1 run that drew the Lady Tigers within 10.

That’s when Toliver struck with her sixth 3 from several steps behind the line with 2:30 left to regain momentum for the Terps. It was her only field-goal attempt of the second half as she tied her career best for 3s, set last March 27 against Utah in Maryland’s run to the NCAA tournament title.

“We told them they can all shoot, but (Toliver) was the most dangerous,” Clemson coach Cristy McKinney said. “And everytime we did, she hit it.”

Langhorne added 17 points and Marissa Coleman 15 for Maryland, which has won its past three since losing its No. 1 ranking after an 81-62 defeat at Duke.

Instead of ranting about Clemson’s comeback, Maryland coach Brenda Frese was happy her club played tighter defense in the second half. The Terps held Clemson’s top scorer, D’Lesha Lloyd, to six points, nine fewer than her average.

“We know we’ve got options on offense,” Frese said. “We’ve got to get our defense up to our offense.”

Maryland couldn’t break free of the Lady Tigers, who trailed 28-22 after Christy Brown’s two foul shots with 8:35 left. Toliver led a 20-4 run, during which the Terps went 8-for-9 from the field.

Toliver opened the surge with her third 3 of the half. She added another long-range shot two minutes later. By the time Tolliver had swished her fifth 3-pointer with 3:49 remaining, Maryland led 47-24.

Toliver finished with 15 points while Langhorne had 10 as Maryland led 48-30 at the break.

Clemson could not contend with its stronger, deeper opponents, getting outrebounded 26-14 in the first 20 minutes.

Frese says her players will need every bit of that effort to get past the Tar Heels.

“Obviously, (North) Carolina has had a week to prepare for this game,” Frese said. “The ACC was kind enough to give them a week and we get two days. We’ve got to get back tomorrow and get to work.”

Still, Langhorne likes where her team is right now, no matter how much practice time Maryland opponents get in.

“I think we’re doing really well, but we have to get better in rebounding,” she said. “Against North Carolina that’s going to be crucial.”

Toliver knows the Tar Heels hope to avenge their NCAA tournament semifinal loss to Maryland last spring. “Overall, it’s going to be intense and hopefully we can take the things we’re learning into that,” she said.