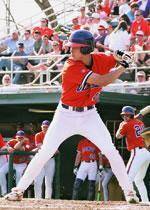 Kris Harvey’s three-run homer capped a four-run ninth inning in Clemson’s 7-5 come-from-behind win over #8 South Carolina in front of 5,922 fans at Sarge Frye Field on Wednesday. The two teams split the four-game series, as the Tigers won the two midseason games after South Carolina won the two early-season meetings. Clemson improved to 24-14, while the Gamecocks fell to 29-9.

Tyler Colvin extended his hitting streak to 12 games in the first inning when he laced a double to center, scoring Brad Chalk. Chalk reached on a single through the left side and went to second on a wild pitch. Colvin’s hitting streak is the longest by a Tiger in 2005.

Clemson put another run on the board in the second inning. Stan Widmann grounded a one-out single up the middle and advanced to second on Adrian Casanova’s sacrifice bunt. Herman Demmink followed with a line-drive single to center, scoring Widmann to give the Tigers a 2-0 lead.

Colvin gave the Tigers a 3-0 lead in the third inning when he hit an inside-the-park home run to right field. The ball went off the glove of Brendan Winn near the wall, then he was not able to pick the ball up cleanly. Colvin never stopped and scored without a play at the plate. It was Colvin’s fourth homer of the season.

After a scoreless fourth and fifth inning, Steve Pearce led off the sixth inning with a double to right-center on a 2-2 fastball from Kopp. Michael Campbell followed with a walk and Ryan Mahoney, brother of former Tiger catcher and pitcher Collin Mahoney (2002-04), singled through the left side on a full-count pitch to score Pearce. Jeff Hahn then entered the game in relief of Kopp. Chris Brown was unsuccessful getting a sacrifice bunt down on Hahn’s first two pitches, but managed to get a bunt down with an 0-2 count to move the runners up a base. Mark Stanley, brother of former Tiger outfielder Henri Stanley (1997-00), then ripped a Hahn curveball just inside the left-field line for a double to score Campbell and Mahoney. After Ian Paxton flew out to center for out #2, Joey Friddle, the #9 batter in the order, grounded an 0-2 single up the middle to score Stanley. With the four runs in the inning, South Carolina has outscored its opponents 45-5 in the sixth inning in 2005.

Clemson had scoring opportunities in the seventh and eighth innings with runners on first and second and one out, but failed to score in both innings.

Pinch-hitter Kris Harvey’s hit a towering three-run home run to left field, giving the Tigers a 7-4 lead. It was Harvey’s ACC-leading 12th homer of the season.

In the bottom of the ninth inning, Cribb retired the first two batters. Pearce then laced a single up the middle and scored on Campbell’s triple to right-center. But Cribb got Mahoney to ground back to the mound for the game-ending out.

Colvin was given the Bob Bradley Award for being the MVP in the four-game series against South Carolina. The sophomore outfielder from North Augusta, SC was 7-for-18 (.389) with a double, two homers, and four RBIs in the series. First-baseman Steve Pearce received the Tom Price Award, going to the Gamecocks’ MVP in the series. Pearce was 6-for-17 (.353) with three doubles, a homer, and three RBIs in the series. Both Bradley, who passed away in 2000, and Price, who still serves as official scorer for South Carolina baseball games, were close friends and longtime sports information directors at their respective schools.

Clemson will travel to Raleigh, NC to play a three-game series at N.C. State this weekend. First pitch Friday is scheduled for 7:00 PM.