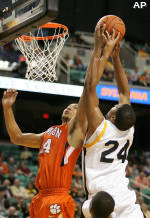 Andre Young had 13 and David Potter finished with 11.

They shot 54.5 percent, broke it open by closing the first half with a huge run and extended their school-record winning streak in non-conference road games to 11.

Clemson’s victory, its 29th straight in November since 2005, was its closest of the season. Neither of its previous two victories was decided by fewer than 40 points.

Brandon Evans had a season-high 17 points and Ben Stywall added 13 to lead UNC Greensboro (0-3). All of the Spartans’ losses have come against ACC schools, and they fell to 1-29 all-time against that conference. Their ambitious schedule includes half of the ACC’s 12 teams.

For Clemson, it was a chance to get comfortable in a building they’ll visit again in a few months–when the stakes will be considerably higher.

The Tigers were one of four ACC teams playing at the Greensboro Coliseum, the site of this season’s conference tournament. None of the current players had been here before; Clemson hadn’t appeared in Greensboro since the 2006 ACC tournament.

After a slow start by their standards, the Tigers made themselves right at home.

They closed the first half with a 17-2 run in which they hit three 3s and stretched their lead into double figures for good. Young had six points during the spurt, knocking down a 3 with a hand in his face moments before converting a three-point play, and Booker capped the run with a free throw that made it 42-24 with 42.1 seconds left.

Clemson came away with points on 10 of its last 13 possessions of the first half while holding UNC Greensboro to one field goal during the final 5 minutes.

Before that, the Spartans kept things tight mainly because foul-prone Clemson kept sending them to the line. UNC Greensboro missed 10 of its first 11 attempts and shot 22 percent in the first half, but hit 10 of 14 free throws.

Demontez Stitt made it a 20-point game with a layup with 18:44 to play, and Booker pushed it into the 30s with a three-point play with 7:49 remaining.