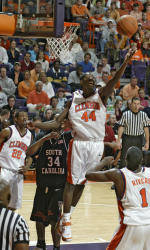 The Tigers (6-0) dominated most of the game, outrebounding South Carolina 47-34. Many of those came on the offensive end, and Clemson was able to convert second-chance points throughout the game.

The game was physical throughout, but the tide turned for good in Clemson’s favor after a brief scuffle between Renaldo Balkman and Julius Powell.

Midway through the second half with the Tigers ahead 62-53, Balkman grabbed a rebound. He was swarmed by three Tiger players, losing the ball and falling to the ground, dragging Powell with him. The two were tied up and appeared to be fighting, but referee Les Jones jumped in the middle.

While several other players turned to see what was going on, South Carolina’s Ousmane Konate came off the bench. He was ejected.

From there, the Tigers grabbed the momentum and outscored the Gamecocks 9-1. Mays was key during the stretch.

After Vernon Hamilton steal and behind-the-back pass, Mays brought the crowd to is feet with a thunderous dunk to put Clemson ahead 67-54 with 9:08 to go. Later in the run, Mays was fouled on a break, but after making the layup, he couldn’t convert the three-point play.

South Carolina tied the game at 47-all with 16:58 to go. From there, the Tigers went on a 24-7 run over the next eight minutes to put the game away.

South Carolina, which trailed for most of the first half, came out with energy in the second period. Kinsey, who was held to just two points in the opening period, scored a couple of baskets to tie it at 47. He had been averaging 19 points a game.

In true Palmetto State fashion where football is king, the seniors on the Tigers football team were honored at halftime. Quarterback Charlie Whitehurst, who went 4-0 against South Carolina in his career, drew the largest cheer. Clemson defeated South Carolina on the gridiron 13-9 last month.

Toward the end of the game Clemson fans began chanting: “Just like football.”