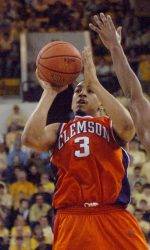 ATLANTA (AP) — Akin Akingbala scored 19 points and Clemson’s zone defense held Georgia Tech scoreless for 7 1/2 minutes in the second half of a 73-63 win on Saturday.

Clemson responded with a 10-0 run and outscored Georgia Tech 23-6 the rest of the way to snap a two-game losing streak. The Yellow Jackets dropped their third straight ACC game after starting out 2-0 in league play.

Akingbala made 7-of-15 from the field and 5-of-7 free throws — a big improvement over the 50 percent he had been shooting at the line. Julius Powell added 16 points and Shawan Robinson scored 15.

Akingbala had seven points down the stretch, and Robinson put the Tigers ahead to stay with a 3-pointer that made it 60-57 with 10:43 remaining. Vernon Hamilton, who had 12 points, hit back-to-back jumpers that helped Clemson pull away.

Morrow led the Yellow Jackets with 14 points in the first half, hitting three straight 3-pointers in less than a minute. But the sophomore guard, who started out shooting 5-for-9 from the field, made only one shot in his last nine attempts and finished with 16 points.

Fredrick’s jumper as time ran out in the first half put the Yellow Jackets ahead 43-38. Clemson was outrebounded 26-10 in the opening period, but the Tigers were able to stay close — largely because of 13 turnovers by Georgia Tech.

The Yellow Jackets were just as sloppy in the second half, winding up with 27 turnovers to offset a 49-27 edge on the boards. Clemson had just 12 turnovers.

Jeremis Smith scored 10 points and grabbed 13 rebounds for the Yellow Jackets. Ra’Sean Dickey also had a double-double with 10 points and 13 rebounds. Fredrick chipped in with 14 points but had five turnovers.