CLEMSON, S.C. – For the first time since 2012, the Clemson Volleyball team won its fourth straight ACC match with its 25-18, 25-23, 25-15, sweep over Miami in Jervey Gym Friday night. Friday’s win over the Hurricanes marks its second straight sweep over Miami – having done so in Coral Gables, Florida last season – and the Tigers’ second straight sweep in as many matches with their 3-0 effort over Wake Forest last Sunday (Oct. 20). Clemson was led by the Tigers’ front row, which helped Clemson hit above .300 for the second straight match. Additionally, Clemson’s Ava Pritchard recorded a career-high 9.0 blocks.

Offensively, the Tigers were led by Ani Clark (nine kills) and Solei Thomas (eight kills), both of whom also posted hitting percentages of .727. Additionally, Clemson’s Kaylin Korte registered nine kills on a team-high 25 attempts, while recording 13 digs, one shy of her season high. Coming off the bench, sophomore Ashtynne Alberts gave Clemson a solid offensive lift with six kills on eight attempts, in addition to her two block assists.

Thanks to all of our alumni who came out to support us tonight 💜🧡💜🧡 #ClemsonFamily pic.twitter.com/r8mhNtgVxQ

Up next, Clemson (10-10, 4-5 ACC) returns to Jervey Gym on Sunday, Oct. 27 to host Florida State at 1 p.m. Sunday’s matchup against the Seminoles is set to stream on ACCNX. For the Tigers’ complete 2019 schedule, click here. 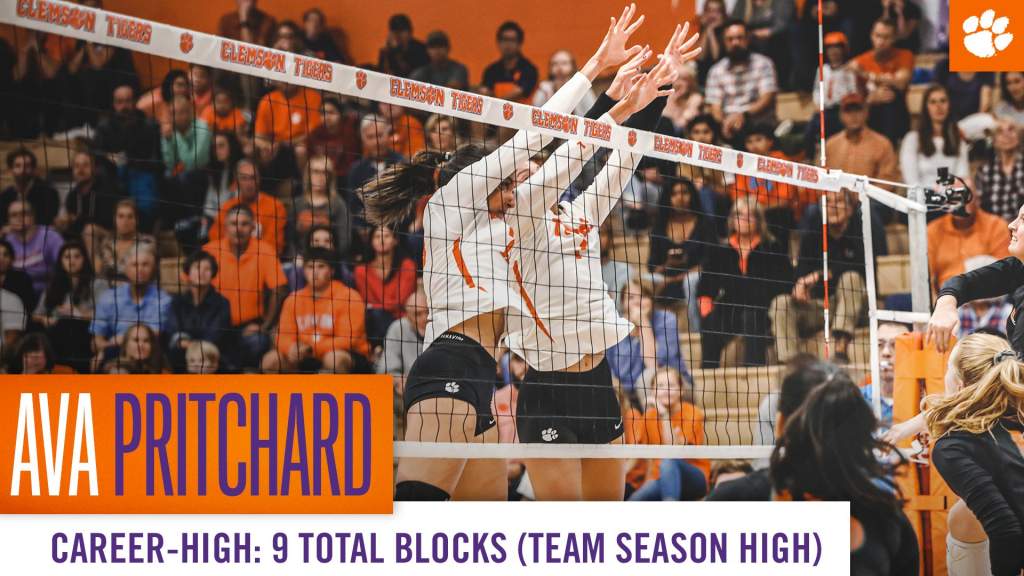